Yet another superhero movie featuring a second-tier character from the Marvel stable. Or should that be a super-anti-hero, because Venom isn’t your usual superhero? We first met Venom in the Sam Raimi-helmed Spider-Man 3, when he was played by Topher Grace. And despite its origins with Spider-Man, Venom sits outside the Marvel Cinematic Universe. The film itself has been produced by Sony rather than Marvel Studios itself, and that’s probably the major reason it’s such a mess. Marvel Studios are far more protective of their franchise characters and more respectful of the comic book origins.

Venom purports to give us an origins story for the character and fill in the backstory. However, it draws from the template for many other superheroes from the Marvel stable – an ordinary person is infected by an incident in a laboratory, transformed and given superpowers. Then he has to learn how to harness his powers and use them for good and defeat evil forces that threaten his world. 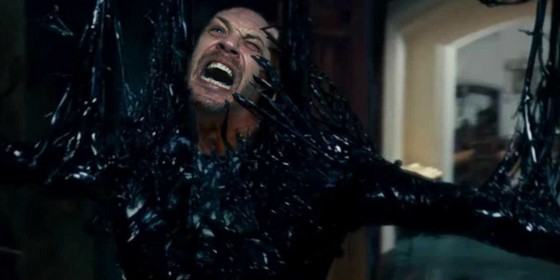 Eddie Brock (Tom Hardy) is a crusading journalist in San Francisco. Then in one day, he loses both his job and his girlfriend Anne (Michelle Williams) a high-powered lawyer, after he uses information from her confidential legal files when interviewing billionaire scientist Carlton Drake (Riz Ahmed). Drake is suspected of using homeless people as subjects in secret experiments.

A scientist with some sort of God complex, Drake is experimenting with an alien symbiote, trying to meld the slimy lifeform with humans. One of Drake’s spaceships has crashed in the jungles of Malaysia. All of the symbiote samples were recovered – bar one. It has morphed into the body of one of the rescuers and then transforms itself continually from one human host to another as it makes its way to San Francisco and the other samples.

With its ability to move from one human to another, this body-snatching alien lifeform is similar to the nasty creature at the heart of Jack Sholder’s superb 1987 thriller The Hidden, which turned innocent people into vicious killers.

Brock sneaks into Drake’s laboratories one night looking for the evidence to support his theory. But he is attacked by one of the human guinea pigs and infected by the alien creature. Brock finds himself possessed by the alien presence that has a myriad of powers and a heightened sense of self-preservation. Drake’s own private squad of mercenary killers pursues Brock. A car chase through San Francisco makes good use of the city’s hilly streets. The film ends with a climactic showdown between two CGI created characters, which overloads on less-than-spectacular special effects and sloppy editing that renders them almost incomprehensible.

Hardy has an intense screen presence, and he delivers a manic and unhinged performance here as his character wrestles with the alien within and tries to restrain it from wreaking too much havoc. There’s a great scene set in Brock’s apartment when he discovers the extent of his powers for the first time while fighting off some of Drake’s henchmen. The intensity though is tempered with some bleak touches of unexpected humour. Hardy apparently underwent extensive makeup sessions for the transformation his character undergoes. The makeup team have captured the look of the creature though, with its inky black skin, sharp teeth and long, slimy tongue. Venom looks pretty much like the comic book artists imagined him.

Hardy is the best thing about Venom, and brings some much-needed energy to the material. Both Williams and Jenny Slate are lumbered with fairly thankless roles here, while the usual superb Ahmed is hampered by the limitations of his cliched villain.

So it’s a pity that the film has been let down though by a messy and lacklustre script from Jeff Pinkner, Scott Rosenberg (Jumanji: Welcome to the Jungle) and Kelly Marcel. It seems to lack an understanding of the character and the source material itself. The script is riddled with inconsistencies and an uneven tone that veers between sci-fi horror, superhero action and black humour.

With its ability to rip humans apart with its razor-sharp teeth, the eponymous Venom is a fairly violent creature, but director Ruben Fleischer (Zombieland) has neutered him and toned down the gore for a more family-friendly rating from the censors. Thus, Venom is tonally uneven and lacks the hard edge it needed. The film should have been more like Deadpool and its sequel, and the filmmakers should have embraced the comic’s violence and subversive sense of humour.

Venom is a special-effects driven film, but unfortunately many of the effects are second-rate. With this messy, disappointing film, superhero fatigue has well and truly set in.