It’s the time of year when serious Oscar contenders swamp our screens. But sometimes it’s good just to sit back, disengage your brain and indulge in something silly. For that, there’s Jumanji: Welcome to the Jungle.

This is a faux-sequel to 1995’s Jumanji, a film perhaps nostalgically remembered as better than it actually was. The nostalgia factor no doubt ramped up with the recent passing of Robin Williams. 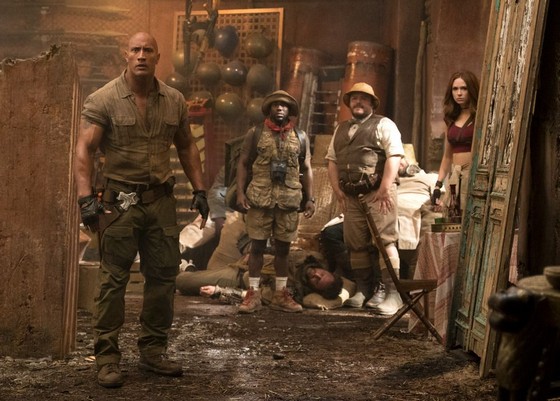 Without going into too much detail, the film begins with four very different kids receiving detention. Their “job” is to unstaple dozens of magazines for recycling. As kids will do, they soon ditch that in favour of playing an ancient video game one of them finds. The game instantly transports the kids into its jungle setting where they “become” the avatars they’ve chosen. Nerdy Spencer becomes a rugged adventurer (Dwayne Johnson); athletic Fridge becomes a dumpy zoologist (Kevin Hart), vacuous Bethany is an overweight middle-aged man (Jack Black), and the awkward Martha morphs into a kick-ass woman (Karen Gillan).  Within the game they meet guide Nigel (Rhys Darby), bad guy Van Pelt (Bobby Cannavale) and “lost” soul Alex Parrish (Nick Jonas). They soon discover the way to win the game and return to the real world is a return a jewel to a jaguar sculpture (told you the script was thin). But they only get three “lives” in the game. If they lose all three, they’ll be trapped forever.

Director Jake Kasdan (Bad Teacher) brings a jaunty style to the film without ever being in danger of introducing any real substance. Lead screenwriter Chris McKenna keeps the original concept of players being “sucked into” a game – though this time it’s a video game, not a board game. The rather thin script draws heavily on The Breakfast Club and Indiana Jones. Let’s face it, this kind of story is never going to win an Oscar, but McKenna and his team at least keep things light. The outcome is never really in doubt, although the script does a pretty good job of conveying the “rules” of the game and working within them.

The film has the look and feel of a theme park, which I found both grating and strangely appropriate. Kasdan handles its action set-pieces reasonably well, despite a heavy reliance on CGI.

The cast seem to have a lot of fun with the characters, particularly Jack Black who gets to channel a social-media-obsessed teenage girl (actually, now I think about it, that’s kind of creepy). Kevin Hart gets little to do except be the butt of jokes, which is a shame. Karen Gillan gets more opportunity as Martha; but the film is clearly built around Dwayne Johnson as Spencer. While I like Johnson’s easy-going charm, this is the type of role he must surely be sick of by now. Safe to say he doesn’t “stretch” here. Sadly the excellent Bobby Cannavale is wasted as the most generic of movie villains.

Jumanji: Welcome to the Jungle is disposable popcorn entertainment. But at least it provides a light, family-friendly alternative. If you’re feeling a bit weighed down by the heavy fare on offer this time of year (and I’m not talking about turkey and pudding) this could be just the right diversion.

1 thought on “Jumanji: Welcome to the Jungle – movie review”