You know what’s fun sometimes? Haphazardly starting a film without knowing what it is about and afterwards admitting you were pleasantly surprised. That’s my experience with Don’t Hang Up. A film with a bit of suspense and tension. And thanks to the short playing time you don’t have the feeling it was a waste of time. Even though it isn’t a blockbuster. 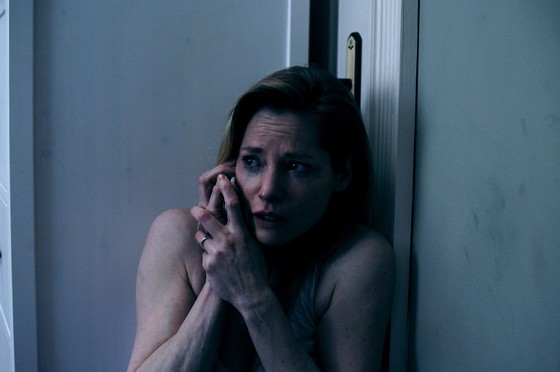 It’s also the first time that I didn’t feel sorry for the two teenagers Sam (Gregg Sulkin) and Brady (Garrett Clayton). In this movie, these two spoiled, annoying brats reap what they have sown. And the whole time I was expecting the rest of the gang to pop up suddenly and announce it was all one big joke.

Like many others, I found the two main actors irritating. But then you have to admit their acting was masterful. Because wasn’t that the whole point? After all, they are two obnoxious young boys who pull pranks on others. They make extreme prank calls. The only thing I couldn’t believe was the fact that those pranks were watched so massively after posting them online. Is that a reflection of what our society is evolving into? A society where gloating is self-evident?

Don’t Hang Up is a low-budget film. That’s noticeable. Everything takes place mainly in the parental home of Sam. The camera work is uncomplicated but to-the-point. Besides a camera moving through the set in a penetrating way, it generally looks mediocre. It gets bloody in this film, but the used “practical effects” don’t look spectacular either. And yet this film was worth a watch and can easily be added to a whole series of other films from the same mid-level.

Because of the short running time, the pace is swift in this movie and you don’t have to wait long before the unwanted caller turns up. And still despite the pace, one manages to increase the tension gradually. The sinister caller has a rather frightening voice (a Jigsaw-like tone), which in turn makes it extra creepy. His technological omnipotence was slightly exaggerated though. And despite the fact that it’s about pretty arrogant and unsympathetic youth, I found the friendship and expression of sacrifice commendable. But all in all, I couldn’t avoid gloating and a convincing inner “Yes!” resounded at the end.

Don’t Hang Up is now streaming on Netflix.