Who would have thought that one of the biggest – and tawdriest – sports scandals of the 20th Century could play out as Greek tragedy? But Australian director Craig Gillespie (The Finest Hours) manages that – and a lot more – with I, Tonya.

This ingeniously devised film delves into the life of Tonya Harding, the controversial American figure skater. Her notoriety (in case you weren’t aware) arises from what the film euphemistically calls “the incident” – a vicious attack on Harding’s rival Nancy Kerrigan in the lead-up to the 1994 Winter Olympics.

The film is both based on, and constructed as, a series of interviews with the key players. Gillespie intercuts those interviews with dramatic sequences, footage from the time and asides to camera, to create an intricate – but inherently unreliable – narrative. And that unreliability is what sets I, Tonya apart. 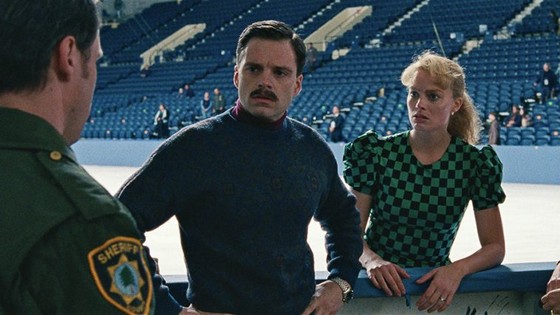 As the title suggests, Tonya Harding (Margot Robbie) is the main focus. In the early sequences, we meet her and the two major influences in her life – her appalling mother LaVona (Allison Janney) and her equally revolting lover Jeff Gilhooley (Sebastian Stan). Tonya starts skating at age 3 and, under the tutelage of the kindly Diane Rawlinson (Julianne Nicholson), becomes a rising star by the time she’s 15. The girl from the wrong side of the tracks is soon performing feats on the ice most could only dream about. The somewhat conservative figure skating establishment however doesn’t approve of her choices or her “look”. So Tonya can’t just be as good as everyone else, she has to be three times better to even get a look in.

Then Jeff comes on the scene and Tonya’s life gets flipped – though not in a good way. Jeff is abusive and violent. But for reasons only she can fathom, Tonya sticks by him; and eventually marries him. Their relationship is marked by frequent splits, followed by reconciliations. Eventually Jeff convinces Tonya to appoint him as her manager. He then involves his rather clueless buddy Shawn (Paul Walter Hauser) as her “bodyguard”. Together the none-too-bright pair hatch a vague plan that involves some unsavoury characters – and Nancy Kerrigan.

I admit I’m a bit of a sucker for movies featuring unreliable narrators. At least they give you the chance to choose who you believe. This film features at least four of them, so sorting truth from lie is a fraught exercise. If you already have an opinion about Tonya Harding or “the incident”, this film is unlikely to change that opinion. It may help to put it in some sort of context though. But in the end, I, Tonya isn’t about “the incident” at all.

Gillespie is far more interested in what led Harding to “the incident” than in the sensational events that followed. And that’s where the Greek tragedy comes in. She had a controlling, heartless parent in LaVona. She also grew up in a house where money was scarce. Her childhood trauma then mushroomed into physical abuse at Gilhooley’s hands. Yet through all of this, she maintained a steely focus on the “prize” – getting to the Olympics and (just maybe) being the best figure skater in the world. That she succeeded at all is remarkable. That she did it against the backdrop of the relentless drama in her life is extraordinary.

While Harding’s life was certainly marked by abuse and pain, Gillespie maintains a generally upbeat tone. There are moments of pure comedy here. I’ve seen some reviews criticising this mix of comedy and darkness as unevenness in the film’s tone. All I can say is it worked for me. And a similar approach seems to have worked out okay for Quentin Tarantino.The whole thing is underscored by a rocking – even if occasionally pretty obvious – soundtrack. Jade Healy and Jennifer Johnson deserve special note for their meticulous production and costume designs

Margot Robbie (Suicide Squad) has of course been nominated for an Oscar for her performance as Harding. She fully deserves the nomination. Rather than merely “acting”, she channels Harding (something highlighted in the end credits, which feature clips of the real Harding). You could say similar things about the film’s other Oscar nominee, Allison Janney (The Girl on the Train), who’s also brilliant as the horrible LaVona. Sebastian Stan (Logan Lucky) is – scarily – good as the manipulative Jeff. Julianne Nicholson (Black Mass) lends solid support as Diane; while Paul Walter Hauser plays a pivotal role as Shawn, and provides much of the comic relief.

I, Tonya is a rivetting drama that goes far beyond the sensational headlines. It’s a stunning, tragic portrait of a woman trapped by circumstances but determined to transcend them. How “true” is it? I guess that’s up to you.