Diminutive 88-year old filmmaker Agnes Varda (The Gleaners and I) returns to the screen with the whimsical road-trip documentary Faces Places; her first feature film in nine years.

Here she teams up with 33-year old French visual artist and film director who goes by simply JR. He’s known for his large scale photographic murals, and the results are a delight to watch. JR continually sports his signature dark glasses, which he never takes off (much to Varda’s frustration), and trilby hat. There’s plenty of playful banter between Varda and JR as they explore their views of the world. But there’s also obviously a mutual respect there. The tone of the film is set right from the opening with its clever animated title credit sequence. 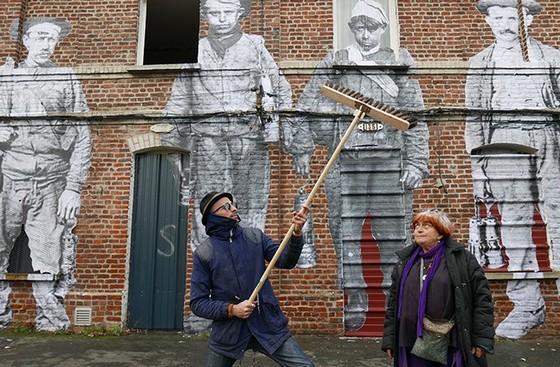 Together Varda and JR travel across the country in JR’s customised van. The pair visit towns, talk to the people they meet and taking lots of photographic portraits along the way. They chat to farmers, dock workers, factory workers and generally celebrate the curious folk they encounter and their fascinating stories. They enlarge the photos and paste them on the front of buildings, ships, and even shipping containers at the port of Le Havre. In one scene they photograph a woman who is the last resident left in a row of houses that used to be owned by miners. The houses are due to be torn down, so they decorate them with her portrait and those of other miners as a tribute.

In many ways Varda is revisiting places from her youth and heyday as a filmmaker. She recalls many of the people she has filmed over the years. Along the way, she and JR visit the grave of renowned photographer Henri Cartier-Bresson, another of her contemporaries. Varda, who was one of the leading lights of the French New Wave in the 50s, also decides to introduce JR to Jean-Luc Godard, her contemporary and one of her heroes. She does so largely through photos and reminiscences. The film gives us some insights into the creative nature of both Varda and JR, as well as being a thoughtful meditation on mortality and the past.

There’s almost an aimless meandering quality to the material, which gives the film an almost episodic feel. The film has been deftly edited together by Maxime Pozzi-Garcia and Varda herself.

Despite its generally upbeat mood, an air of melancholy and sadness pervades the latter sections. It’s though as we’re made aware of the passing of time and the loss of traditions. Also Varda’s failing health is more obvious.

And at a brisk 89 minutes Faces Places (aka the more alliterative Visages Villages) never outstays its welcome.