From 1996 to 2001, the Taliban ruled over Afghanistan with an iron fist. During this time, many basic human freedoms were curtailed and public executions became common place. All are highlighted in The Swallows of Kabul, a remarkable portrait of life under Sharia law. 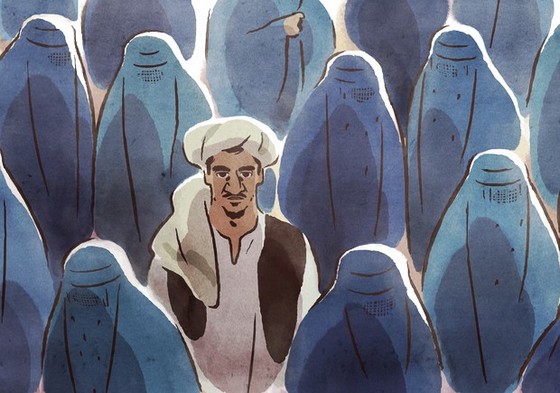 Specifically, we are in the Afghan capital, Kabul, in the summer of 1998. The place is in ruins. The population is shell-shocked. The film focuses on two couples – one young and the other somewhat older. The younger pair is very much in love. Husband Mohsen (the voice of Swann Arlaud), a history teacher, is despondent.  He has just witnessed the public stoning of a woman determined to have fornicated. Against his better nature – along with so many others – Mohsen hurled a rock at her.

His wife, Zunaira (Zita Hanrot), an artist, is more of a free spirit, but must be careful not to run foul of what the Taliban deem propriety. That includes being covered from head to toe in public and not playing music too loudly in one’s home. Everything goes pear-shaped after Mohsen and Zunaira head out to recapture a fond memory at a bookshop, now in ruins.

The older male, Atiq (Simon Abkarian), is warden of the prison for condemned women, but with no real authority. With a gammy leg – the result of a war wound – he is a broken man, seemingly with no life left in him. He married Mussarat (Hiam Abbass), the woman who tended to his wounds, but it is a loveless marriage. Now she’s suffering from terminal cancer and can’t shake the belief that she has let down her husband, who she fears has a “fossilised” heart. That changes when a young woman found guilty of killing her husband arrives at the jail. The consequences of Atiq taking action are profound.

A superbly rendered, searing and heart-wrenching story of life under the Taliban, this is adult animation of the highest order. It’s artwork with an acid tongue. The watercolour-style animation is sublime, the sounds all too real and the setting devastating. The atrocities of religious fundamentalism are on trial and they smack of barbarity at every turn. Man’s inhumanity to man – mind you, in this case, mainly women (who are regarded as inferior to men and therefore second-class citizens) – is brought into sharp focus.

Once seen, the imagery won’t be forgotten. Among the most memorable scenes is one early on when blood is seen pooling underneath the chador of the woman who has been stoned to death. Credit must also go to the writers Zabou Breitman, Patricia Mortagne and Sébastien Tavel for crafting such an evocative piece, based on a 2002 book of the same name by Algerian author Yasmina Khadra. And then there is the direction of Breitman and Eléa Gobbé-Mévellec, which, too, is full of merit.

Regardless of whether or not animation is usually your thing, The Swallows of Kabul needs to be seen. It truly is an extraordinary piece of work.