Paul Murphy’s NZ feature Lowdown Dirty Criminals is an enjoyable but somewhat derivative crime-comedy. The darkly comic caper cribs from the Guy Ritchie playbook, with a lot of his flashy visual flourishes. The non-linear narrative structure uses plenty of flashbacks and replays scenes from different perspectives. 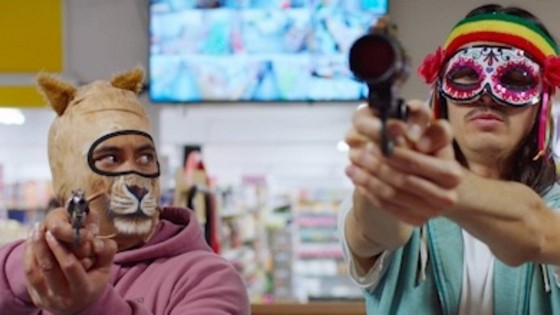 The film opens with a Mexican standoff in a Wellington bar between a disparate group of armed characters. Then an extended series of flashback sequences take us back to the beginnings of this convoluted caper of mistaken identities, hapless criminals and missing “merchandise”. Freddy (James Rolleston) loses his job as a pizza delivery boy. He and his best buddy Marvin (newcomer Samuel Austin) naively conclude a life of crime may lead them out of a life of unemployment and poverty and to the wealth and standing they desire. They are drawn into the circle of local crime boss Spiggs (Scott Wills), who gives them the task of finding and killing Donny Kong (Min Kim), a local man who has been sleeping with his wife. But when they mess up their first job, Spigg holds Marvin hostage, to ensure that Freddy completes the mission. He threatens to put a bullet into him at high noon if Freddy does not meet this certain deadline.

Complicating matters is the presence of Semo (Robbie Magasiva) and Roy (Cohen Holloway, who has worked extensively with Taika Waititi), two dim-witted henchmen sent by the crime boss known as “the Upholsterer” (Rebecca Gibney) to find some missing “merchandise” in Kong’s possession. The merchandise sought by “the Upholsterer” serves as the film’s McGuffin.

Lowdown Dirty Criminals has been written by David Brechin-Smith, who is better known for his work on New Zealand television series like The Cult. His script maintains a fine balance between the absurdist comedy and the gritty crime and violence of the milieu, and he seems aware of the tropes of the genre. The audience never quite knows where it is all headed.

Murphy (Second-Hand Wedding) directs in energetic fashion, obviously been inspired by Tarantino and the like. The film features a cast of colourful but unsavoury characters, played with relish by a solid cast of New Zealand actors.

Rolleston is perfectly cast as the somewhat naïve and eager to please Freddy, a role that has become familiar territory for the young Kiwi actor. Cast largely against type Gibney seems to be enjoying herself as the ruthless foul-mouthed ruthless crime boss who wields a mean knife and takes part in a grisly autopsy.