Secrets of the past hang over Yuval Adler’s drama, The Secrets We Keep.

Maja (Noomi Rapace) suffers from her experiences as a Romanian gypsy during World War II. To this point she’s kept the dark secret to herself. She’s forged a new life with her husband, Lewis (Chris Messina) – a GP – and young son in small town America. But after 15 years, the nightmare is about to return. She hears a strangely familiar whistle while at a park with her son. She notices  a tall man, Thomas (Joel Kinnaman), and follows him. 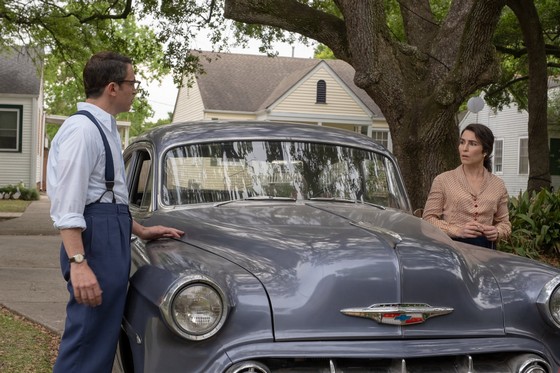 Worse is to follow as she’s compelled to take Thomas – who’s married with two young children of his own – captive to extract the devastating truth from him. He denies he’s an ex-Nazi, the perpetrator of heinous crimes against her and others. He insists he’s Swiss and never saw action during the war. Maja has suffered nightmares in the past and was put under the care of a psychiatrist. Her memories of the war are fragmented, but she’s certain about Thomas and what he did. All this comes as a bombshell to Lewis who isn’t sure where the truth lies. Before this is over blood will be spilt.

The intense performance by Rapace (The Girl with the Dragon Tattoo) will be my enduring memory of The Secrets We Keep. Hers is a commanding presence. She is relentless – so much so that you dare not avert your gaze. The look in her eyes says it all.

From the outset, a sense of dread permeates the picture. Horror, anger and outrage are juxtaposed with the naive neighbourly delights of a gentler era. The filmmakers have done a fine job capturing the look of provincial USA circa late ’50s. The period detail – everything from the sets to the costumes, props and cars – is impressive.

I knew where the plot was heading – that was pretty obvious (the film signals its punches too much) – and I felt the interrogation dragged somewhat. Once it revealed what Maja had endured, there were only limited opportunities to take that further. That had everything to do with the plotting by Adler and Ryan Covington. Still, one welcome twist arrives as The Secrets We Keep nears its conclusion.

So, even with a few flat moments, the movie has bite.