Talk about getting yourself into a pickle. In the decidedly quirky An American Pickle, Herschel Greenbaum (Seth Rogen) certainly does in more ways than one.

It is 1919 and Herschel is digging ditches for a living in Eastern Europe in a fictional place called Schlupsk. When he sets eyes upon Sarah (Sarah Snook) it’s love at first sight. They marry and the future is looking bright until the Cossacks invade. The Greenbaums emigrate to America, the land of opportunity, where Herschel finds work in a pickle factory. Sarah meanwhile falls pregnant. Then, horror of horrors, rats overrun the pickle factory. As the factory shuts down, no one notices that Herschel has fallen into a large vat of brine. 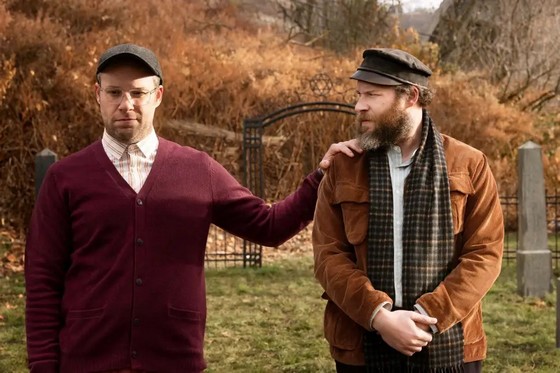 Surprisingly, he is found alive 100 years later. The saltwater has preserved him to appear as he looked like a century earlier. Although the world has totally changed in that time and his beloved wife has, naturally, passed on, Herschel connects with his only living relative – his great grandson Ben (also Rogen). Ben is the same age as Herschel was when he fell into the vat.

Herschel is a religious Jew. Ben, who – as an adult – lost both his parents in a car accident, is anything but. Herschel’s strident old-fashioned views offend Ben. While Herschel is hardworking and resourceful, Ben has been developing an app for five years but can’t find an investor to take it to market. An incident in a cemetery involving a billboard for Vodka results in a massive falling-out between the pair. And at that point the film really takes off.

Simon Rich adapts his own 2013 New Yorker short story “Sell Out” for the big screen; with Brandon Trost making his feature film directorial debut. As much as I wanted to like all of it, I found An American Pickle uneven. I liked some bits and not others. I didn’t mind the setup, but it tended to lose its way when it tried to establish a strong familial link between Herschel and Ben. Unfortunately, I thought An American Pickle laboured until the antipathy between the pair was cemented. Even then, though, the unevenness continued. Significant plot leaps undermined the overall flow and my enjoyment. I found it wasn’t as clever, as insightful, or as funny as it could have been.


Still, Rogen is highly capable playing opposite himself. If the scripting and continuity had been better, the result would have also been better.

So, An American Pickle showed promise and had its moments, but wasn’t entirely satisfying.