Are you an Agatha Christie fan? Does nothing get you going quite like a drawing room mystery? If you said yes, then Régis Roinsard’s stylish mystery The Translators (Les traducteurs) will be catnip for you.

But Roinsard and his screenwriting collaborators Daniel Presley and Romain Compingt give the genre a modern sheen with a comprehensive updating. They swirl a number of threads around before bringing them together at the end. I’m not completely sure Roinsard  ties all of them off neatly, but I thoroughly enjoyed watching him try. 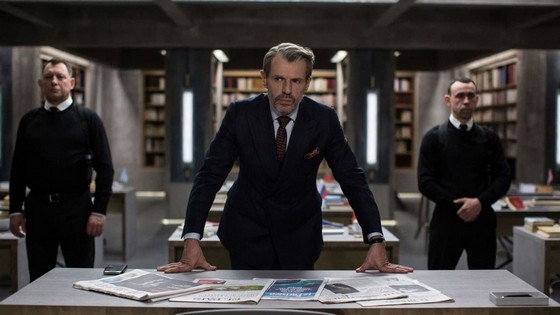 Eric Angstrom (Lambert Wilson) has built a successful publishing house largely on the back of the wildly popular “Daedalus” mystery series. The fact the author is a mysterious recluse has certainly helped the novels’ cachet. Now Angstrom is ready to release the final book in the trilogy, and interest is at fever pitch. Determined to leverage the release for all it’s worth, he recruits a team of nine translators to have the book ready to go in multiple international versions as soon as it drops in France.

They include cool Russian Katerina Anisinova (Olga Kurylenko); nerdy Englishman Alex Goodman (Alex Lawther); and brooding Italian Dario Farelli (Riccardo Scamarcio). To protect the book, Angstrom basically imprisons the team in a bunker under the watchful eye of his assistant Rose-Marie (Sara Giraudeau) and a security team. The bunker has some nice touches (like a gourmet chef) but still, they’re basically trapped.

Angstrom plans to drip-feed the translators a few pages at a time. But his best-laid plans come awry when someone leaks the first ten pages of the novel online. Worse, the leak comes with an extortionate ransom demand – and the threat that if it’s not paid, further leaks will occur. Angstrom quickly realises the leak must have come from inside the bunker. So he embarks on an increasingly dangerous hunt for the culprit that will threaten not only Angstrom’s company, but the lives of the translators.

Roinsard shows a flair for the genre, ramping up the action with some style. The second act in particular zips along with a rollicking energy as the stakes get higher. Despite the conventions of traditional drawing room mysteries, the film breaks out of its bunker “bubble” through a series of flashbacks and flash-forwards. These include a thrilling race against a train – one of the film’s highlights.

The script cleverly leaves a trail of breadcrumbs (and some Easter eggs) for the attentive viewer to pick up. It directly references Agatha Christie (it’d be a spoiler to say which book though), but clearly pays homage to Hitchcock as well. That said, try as I did, I didn’t pick the culprit or their motivation before the big reveal. As mentioned, the film positively zips along, so I wasn’t sure Roinsard had tied off all the loose ends. If he didn’t though, it didn’t bother me, as I was happy to go along for the ride. If the film has a flaw, it may be the choice to have nine translators. That’s quite a lot of key characters to keep track of. As a result, at least some of them get lost in the mix.

The Translators is tailor-made for mystery buffs. This intelligent but engrossing film gives fresh impetus to the drawing-room genre. It’s one of those rare films you can either choose to follow closely, or just go along for the ride. Either way, it’s a film worth seeking out.