In Sean Durkin’s The Nest, a house of cards is waiting to come tumbling down.

We’re in Ronald Reagan’s America – specifically 1986. British-born stock trader Rory O’Hara (Jude Law) is having a hard time of it. On the surface all appears peachy. He’s married to an American horse riding instructor, Allison (Carrie Coon). Rory has a good relationship with their 10-year-old son Benjamin (Charlie Shotwell) and has taken his wife’s older, high school-age daughter, Samantha (Oona Roche) to heart. Each morning, he gently wakes Allison with a freshly prepared cuppa and she reaches for a cigarette. But business-wise Rory isn’t doing well. 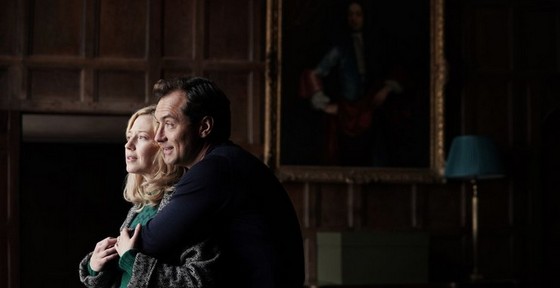 One day he surprises Allison with the news that he has an opportunity back in his native London with his old boss, Arthur Davis (Michael Culkin). Rory talks up the fact this will be his business that Davis is merely helping to bankroll, when that isn’t the truth. Against Allison’s better judgment, the family moves for the fourth time in 10 years.

Rory departs ahead of the other three and greets them with gusto in the driveway of a large, old, ostentatious, country mansion for which he has paid a year’s rent in advance and has the first option to buy. He encourages Allison to set up a horse-riding training business on the large grounds; even organising workers to begin construction. The boss welcomes him with open arms, recognising he’s a super salesman. Immediately Rory begins smooth talking the firm’s clientele. Allison queries where all the money’s coming from, but he simply brushes her off. Then things take a turn for the worse.

The Nest tightens its grip as it develops. A feeling of unease permeates the entirety of proceedings, although the reason for that only becomes clear over time. The narrative has been well constructed by writer-director Durkin (Martha Marcy May Marlene), who lived between America and England in the ‘80s and ‘90s. He adopts a slow-burn approach. A haunting soundtrack by Richard Reed Parry elevates the tightrope nature of the piece.

I greatly appreciated the strength in the characterisations of the main players. Jude Law does a fine job portraying a man driven ambition. Carrie Coon is superb. She has strength and vulnerability down pat.

The Nest worked its way into my psyche as I sought a way through the quagmire waiting for an explosion. It’s a movie that merits attention.