Based on the 1975 classic film “Monty Python and the Holy Grail”, a cheeky Camelot spoof on the legendary King Arthur’s quest to find the elusive treasure, the musical Spamalot is a pretty silly show. But silly is not as easy to do as it might seem. Thankfully, Spamalot sees Brisbane Arts Theatre giving audiences nothing but an immensely fun and highly entertaining show of satire, slapstick and irony, as memorable (and quotable) as its source material. 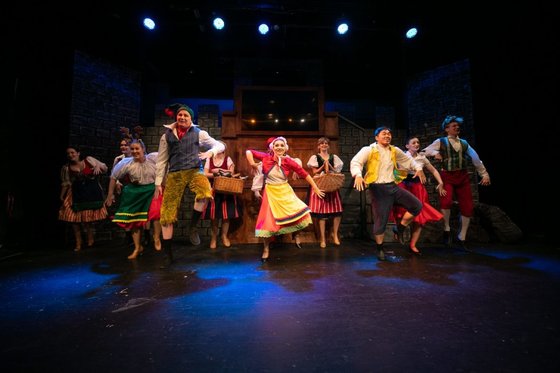 The story (book by Monty Python’s Eric Idle) is pretty irrelevant, but goes as follows … In the 10th century A.D., the self-assured King Arthur (Alexander Thanasoulis) travels England with his servant, Patsy (Oliver Catton), seeking men to join the Knights of the Round Table. Members of the fellowship ultimately come to include Sir Robin (Lachlan Morris), Sir Galahad (Ben Kasper), Sir Lancelot (Damien Campagnolo) and Sir Bedevere (Liam Hartley). Arthur’s belief in his destiny as ruler of England has come from having been given the Excalibur sword by the Lady of the Lake (Laura Fois). Still, when he receives a message from God tasking him with finding the Holy Grail, he embraces the mission and its ensuing extensive search by him and his knights. As any Monty Python fan knows, a whole lot of nonsense follows.

It’s all quite ludicrous, but in Brisbane Arts Theatre’s hands, it actually makes sense. The lead performers are all excellent. Thanasoulis brings an appealing, assured stage presence to the role of King Arthur. The versatile Matthew Nisbet is incredibly funny in all his character roles and, as ‘Brave’ Sir Robin, Morris is wonderfully animated and expressive. Fois is vocally very strong as Arthur’s ‘watery tart’ diva love interest. It is clear that everyone is enjoying themselves and the fun is infectious. There is a lot from which to draw laughs, with absurd situations and nonsensical expressions peppered with puns, dad jokes and ridiculous rhymes. 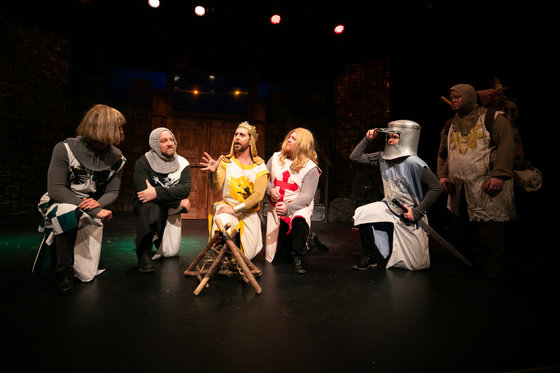 The music is entertaining, even if the numbers are not all that memorable. Television screen projections add interest. It is wonderful to see them used to enable full line of sight access for all in the audience. And the production does well in its realisation of key sketch moments such as the Black Knight’s ‘tis but a scratch flesh wounds and the Killer Rabbit of Caerbannog.

While the exuberant shenanigans can’t be taken too seriously, this is still a show only really suited to those who have a familiarity with the comedy troupe’s idiosyncratic style, lest they just find the whole thing baffling and bonkers. It is playing at Brisbane Arts Theatre until 18th January, 2020.