DC Comics has often played second fiddle to Marvel when it comes to box office success, but perhaps the tide is turning. First we had Wonder Woman, then Aquaman and now Shazam! It plays on the idea that we all have a superhero inside of us. 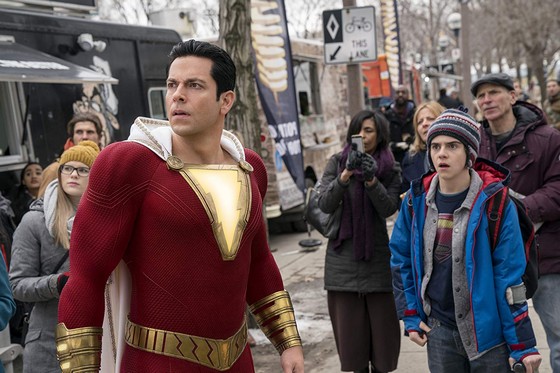 In Billy Batson’s (Asher Angel) case, by shouting out one word –Shazam! –this 14-year-old foster kid can turn into the adult superhero Shazam (Zachary Levi). This power comes courtesy of an ancient wizard (Djimon Hounsou). Still a kid but in a godlike body, Shazam revels in this adult version of himself by doing what any teen with superpowers would do: have fun! Can he fly? Does he have X-ray vision? Can he shoot lightning out of his hands (yes!)? Can he skip class?

With the help of superhero enthusiast friend Freddy (Jack Dylan Grazer), Shazam sets out to test the limits of his abilities. But he’ll need to master his powers quickly to fight the evil forces of Dr Thaddeus Sivana (Mark Strong), who’s got his eye on Shazam’s powers and wants them for himself.

Scriptwriter Henry Gayden builds a considerable back-story, part of which involves understanding how Billy ended up here. That has a lot to do with being abandoned by his mother when he was only three. Since then he’s run away from several foster homes.

Shazam! starts off slowly and somewhat confusingly before it comes into its own. Some of the acting and dialogue is clunky, and that was a turnoff. But the humour is undeniable; and the story has warmth.

Several of the characters have impact, notably Billy, who finds himself dressed in silly maroon Spandex with gold belt and white cape (could his attire be any less attractive?). Then there’s his chatterbox younger sister Darla Dudley (Faithe Herman). She’s among several others who live together in a foster home. She’s always after hugs and positive reinforcement, and was definitely a favourite of mine.

Director David F. Sandberg (Annabelle: Creation) was clearly out to enjoy himself in making this. Shazam! is silly – very silly – but also entertaining in a light-hearted way. As is the wont of these things, unless you sit through the credits you’ll miss a teaser for the almost-inevitable sequel.