The fourth film in The Conjuring series, in which the possessed doll Annabelle originally had a small role, Annabelle: Creation is the origin story of said toy. It also serves as a prequel to 2014’s Annabelle. 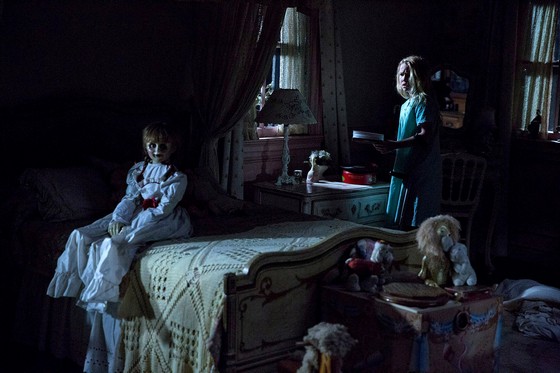 The story starts in the mid-1940s, but the majority of the action is set in the mid-to-late `50s. This fits it into the already established chronology of the series. And since Annabelle was created out of a father’s love for his daughter, screenwriter Gary Dauberman (who also wrote Annabelle) centered the foundation of her sinister nature on the ultimate tragedy – the loss of a child.

Several years after the tragic death of their little girl, a doll maker, Samuel Mullins (Anthony LaPaglia – A Month of Sundays) and his wife, Esther (Miranda Otto – The Daughter), welcome a nun and several girls from an orphanage into their home. Soon, though, they become the target of the doll maker’s possessed creation, Annabelle.

Director David Sandberg (Lights Out) says “the Mullins are a family who went through a horrible experience and didn’t deal with it in a good way. Instead, they let evil into their lives, and now, to atone for certain things that have happened, they make another bad decision.” That choice is to relieve their loneliness of the past 12 years by inviting six young orphaned girls who’ve recently lost their only shelter and their guardian (Stephanie Sigman – Spectre) to live with them. “It’s a bad idea,” Sandberg says, “because, of course, Annabelle is there, too.”

The source tale has a slow build up before the horror is unleashed. The script could have done with some tightening, although the period detail is impressive. In fact, I greatly appreciated the rural setting and the sprawling home in which the action is set.

There is seemingly nothing new under the sun when it comes to films about demonic possession, but just one look at the doll here and you are somewhat “creeped out”. I liked the idea of the nun and displaced orphans and the sweet young girl with the heart of gold (Lulu Wilson – Deliver Us From Evil) who tries to do all she can to protect and care for her polio-affected bestie (Talitha Bateman –The 5th Wave). I thought LaPaglia’s character was underwritten and underutilised. He was just plain weird.

Overall, while all the ingredients are there, the real scares are relatively few. Rated MA, Annabelle: Creation scores a 6½ out of 10.