The life-changing influence of platonic female relationships rarely gets covered in fiction, and for this alone Seven Lies deserves a tip of the hat.  It’s not a subject matter many writers have invested in and anyone who has ever been or spent time around a teenage girl would know that the connections young women make to each other during their formulative years can be the making or the breaking of character. 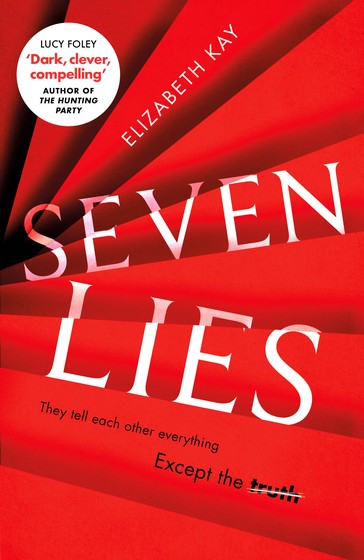 Best friends Jane and Marnie have always had each other’s backs. If one is in trouble, then the two of them are in trouble, they are that close.  Marnie is there to care for Jane when Jane’s new husband is killed tragically in a traffic accident, and Jane is there for Marnie when she senses something is not right with the new boyfriend. But when asked about his suitability, Jane finds that her first instinct is to lie.

When the new boyfriend becomes the new husband, Jane is certain it is only a matter of time before Marnie realizes that Charles is not her forever man. Undoubtedly Charlie is at least a lech, having groped Jane as early as the wedding reception.  Jane finds it necessary to lie again to her friend, and the knowledge of that is a heavy weight to bear.  Overbearing and snide, Charles somehow has pulled the wool right over Marnie’s eyes.  When an opportunity strikes to rid herself of his interference, Jane does not regret in taking it, not for a second.

Working on the driver that in any relationship, there is always one who loves more, Seven Lies conspiratorially invites its unseen audience along to see just how things came to be.  We know early on that Marnie’s husband has been killed, but as to who it is that Jane feels the need to explain her actions to is not disclosed till the final chapter.

With the bittersweet lament that is the power of hindsight, the narrative we are privy to is manipulated by a character in which we develop a growing distrust, and the determination with which Jane proceeds with in protecting what she deems to be rightfully hers is both righteous and relentless.  Jane’s love is suffocating, dangerous and even deadly. At an indeterminate point, the focal point of grief rolls into anger.

Seven Lies incrementally increases the reader’s doubt of the authenticity of Jane’s intentions until everything is viewed through a suspicious lens. An anti-climactic and voyeuristic work where the reader is drawn in close as a co-conspirator, Seven Lies is a book detailing the unravelling of a young woman as she descends down a slippery slope, malicious thoughts becoming deadly actions. The big reveal in as to who Jane is confessing to throughout is the true climax of the novel.  We know Jane can kill, that’s already been shown. But how far will she go?

Author Elizabeth Kay works as a commissioning editor at Penguin Random House in London. Seven Lies is her debut novel and published in Australia by Hachette Australia.