The manipulative Second Act is a good-looking picture that sets out to tick the boxes.

As Maya Vargas (Jennifer Lopez) celebrates her 43rd birthday, she has one wish – a promotion. After 15 years at Value Shop supermarket – six as assistant manager – she’s ready to run the big box store. Her resumé doesn’t scream upper management, but her track record sure does. She’s an innovator who listens to customers, knows what they need and finds a way to deliver. But Value Shop hires “the right man for the job” – a man with an MBA. 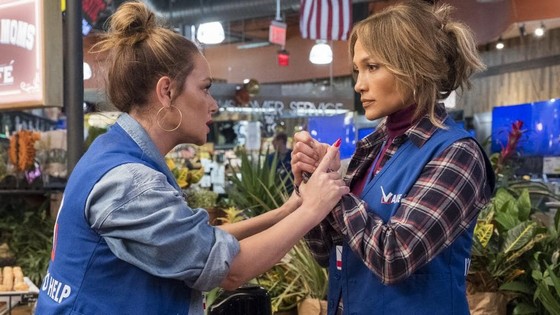 Maya’s boyfriend Trey (Milo Ventimiglia) and best friend Joan (Leah Remini) try to boost her spirits, but Maya is frustrated as once again street smarts don’t equal book smarts. Maya’s prospects brighten when, out of the blue, she lands an interview at an elite consumer products firm. CEO Anderson Clark (Treat Williams) wants to meet her and invites his daughter Zoe (Vanessa Hudgens), a rising star at the company, along too. Clark is impressed, but Maya is deceiving him. She’s constantly at risk of being found out. However, that’s not the only surprise in store.

Second Act was written by Justin Zackman (The Bucket List) and Elaine Goldsmith-Thomas.

This is a movie done by the numbers. Large portions of it are predictable if far-fetched, yet it milks an emotional response at certain tipping points.

J-Lo unsurprisingly dominates proceedings, but her character’s BFF Joan gets many of the best lines. And Maya’s forever-tolerant boyfriend not only puts up with her incessant frustration, but is always nice. So many of the characters in Second Act are supportive of Maya’s needs, but their own back stories are hardly mentioned. Yes, it’s all about her.

Let’s be honest. The cameras clearly love J-Lo. She always looks immaculate. It’s almost as if Peter Segal was directing to create envy and adoration among viewers.

This is lightweight, popcorn fare with no afterlife. It’s one to see and then immediately forget.