Hustlers is a comedic drama about savvy strip club employees who turn the tables on their Wall Street clients. 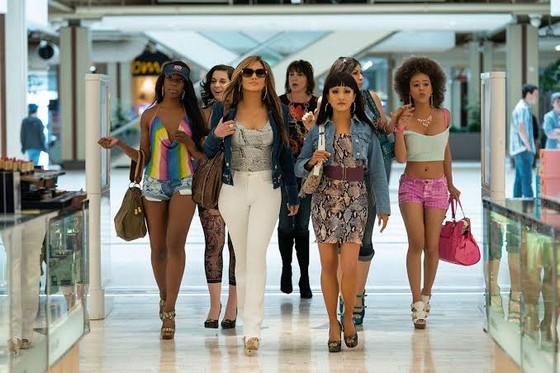 At the start of 2007, Destiny (Constance Wu) is struggling to make ends meet. She needs to provide for herself and her beloved grandmother, who brought her up.  But it’s not easy: the managers, DJs and bartenders each expect a cut, leaving Destiny with a meagre payday after a long night of stripping. Her life changes though when she meets Ramona (Jennifer Lopez), the club’s top money earner. She’s always in control, has the clientele figured out and really knows her way around a dance pole.

The two women bond immediately and Ramona gives Destiny a crash course in pole dancing. Suddenly, Destiny’s career takes off, but then comes to a shuddering halt with the global financial crisis. Ramona cooks up a scheme – an illegal one – to fast-track success. Destiny becomes part of her four-strong crew.

Hustlers was written and directed by Lorene Scafaria. An article in New York Magazine titled “The Hustlers at Scores” by Jessica Pressler provided inspiration.

I didn’t think a movie predominantly featuring strippers could be as boring as Hustlers is; especially in the first act. Fortunately, once the narrative got going, my interest grew. Mind you, I still think the whole story could have been better told.

The two leads are the best things about the film. J-Lo sizzles as a seductress and manipulator extraordinaire in what is one of her finest performance in a picture. She owns the role. Constance Wu is able to convincingly portray the vulnerability, insecurity and apprehensions of her character.

Notwithstanding these positives I felt the material the film was unnecessarily drawn out. Sure, it went from dull to more intriguing, but it barely held my attention.