Mortal Engines turns out to be another post-apocalyptic adventure aimed at teenagers and, possibly, young adults.

Hundreds of years after civilisation was destroyed by a cataclysmic event, a mysterious young woman emerges as the only one who can stop London — now a giant, predator city on wheels — from devouring everything in its path. Humankind has adapted and a new way of living has evolved in the wake of what was known as the Sixty Minute War. Gigantic moving cities now roam the Earth, ruthlessly preying upon smaller traction towns. 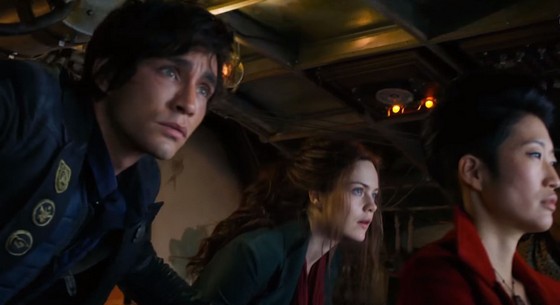 Hester Shaw (Hera Hilmar) was disfigured while trying to protect her mother from the evil clutches of Thaddeus Valentine (Hugo Weaving) and ever since she has been bent on revenge. For his part, Valentine has a questionable vision for the future – one that ostracises just about everyone, including his own daughter, Katherine (Leila George).

Shaw lives in the shadows and calls no-one a friend. But that’s not how apprentice historian, Londoner Tom Natsworthy (Robert Sheehan) sees it. He does his level best to win her over. They’re joined in their quest to save London by Anna Fang (Jihae), a dangerous outlaw with a bounty on her head.

Peter Jackson is one of three screenwriters credited with adapting Philip Reeve’s 2001 young-adult novel of the same name. Christian Rivers – who won a visual effects Oscar for Jackson’s King Kong in 2006 – directs.

A great deal happens in the film. Lots of characters are introduced, and there’s action aplenty; but nobody’s home. For all the visual effects, the storyline felt stock-standard. The script lacked inventiveness; the acting was hardly inspiring; and the two hour plus running time was a real indulgence.

The filmmakers have given us a downbeat mash up of Mad Max and Star Wars. Sure, some of the machines are creative, but beyond that there’s nothing we haven’t seen many times before … and done better. They manage to draw out the back story so it’s revealed in slowly as the film unfolds. But by then, my interest had waned.

If you’re going to throw the kitchen sink at special effects, then make sure you have a better tale to tell – at the very least one with plenty of twists and turns – to carry the day. Incidentally, the cast of extras on board the aggressive city on wheels looked like they were simply cheering on command from the director. And they didn’t just do so once or twice. It was pathetic.

I was just waiting for it to finish … and that’s not a good sign.