Head First Acrobats have taken the adage “boys will be boys” to new heights in the cheeky and cheery Railed. The quartet – AJ Saltalamacchia, Callan Harris, Adam O’Connor- McMahon and Harley Timmermans – are born entertainers who know how to rev up a crowd. Through feats of strength, skill and balance they perform their acrobatic heroics in a thoroughly entertaining hour-long bracket.

They’re cowboys with six shooters and a decided bent as the saloon doors swing open. Bold and bawdy, they challenge and provoke … and don’t the audience love it. Before this is over, they will be baring their toned torsos and wearing the shortest of shorts that ride up their nether regions. 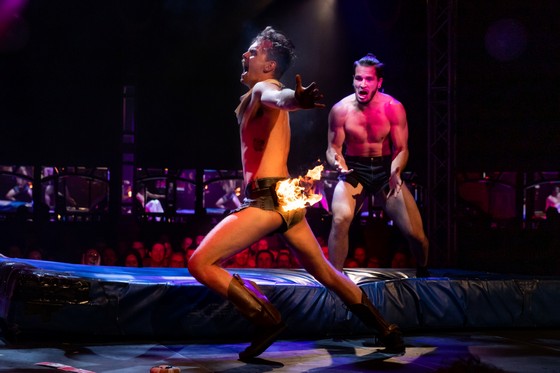 Audience involvement? You betcha … as one hapless lass in the front row discovered when she was chosen to participate in a card trick that became a running joke through the show. From forming a human pyramid to precarious hand stands, from juggling hats to building a chair stack, individually and collectively the lads blast through a series of circus acts. But nothing can prepare you for what happens when two frisky ponies decide to go at it.

Some of the language may be blue (nothing that you don’t hear every other day, mind you), but there is no mistaking the rosy cheeked patrons who lap it all up with the good humour that underpins the theatrics. Railed is playing in the Wonderland Spiegeltent in The Paddock, at the very far end of Federation Square, until 25 September 2019 as part of the Melbourne Fringe Festival.