Three friends – drag queens Mitzi and Felicia, and trans performer Bernadette – board a battered old bus named “Priscilla”. They plan to travel from Sydney across the desert to fulfill a performance engagement in Alice Springs. Mitzi’s past has come back to provide an unlikely second chance. Along the way to the Alice, the “girls” frock up and put on a series of shows unlike anything the locals have seen before. At times it turns nasty and discrimination is apparent; but more often than not they embrace these three strange ladies from the Harbour City.

The film on which this musical is based, The Adventures of Priscilla, Queen of the Desert, is one of the most successful Australian movies of all time. It was released in 1994, a golden period for the industry. Muriel’s Wedding opened the same year and Strictly Ballroom two years earlier. 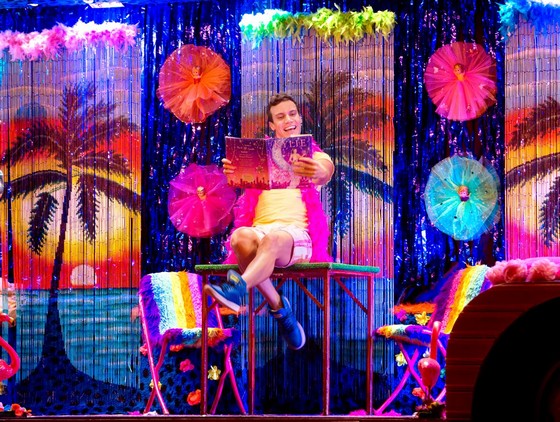 Writer/director Stephan Elliott penned his first draft of the script for Priscilla in a fortnight. He based it on real people and a collection of outrageous jokes he’d been storing up for many years. It was an instant success and grossed more than $57 million on its international theatrical release.

The potential for the hit film to be adapted as a stage musical may now seem obvious, but it took a UK screenwriter and producer, Allan Scott, to set the wheels in motion. He had long wanted to write a stage musical and had been actively searching for the right project. He looked at the Priscilla movie again and realised it contained many of the elements for a successful musical: big characters, great comedy, a heart-warming central story, conflict, sets and costumes and the possibility of great music.

He teamed up with Michael Hamlyn, one of the movie’s producers. By 2004 the pair had negotiated a rights deal with MGM to stage the musical. In January 2006 a staged workshop was held in Melbourne with a company of ten actors, including the lead – then and now – Tony Sheldon (as Bernadette).  At the performance I saw this time around, Tony was replaced by David Spencer. The $6.4 million musical opened on 7 October 2006 at Sydney’s Lyric Theatre. A season at Melbourne’s Regent Theatre followed a year later.

And what an overwhelming triumph the show was … and I am delighted to be able to say remains a decade on. It has a cast of 28, with 21 appearing on stage at any one time. That is not to mention the centerpiece, being the fully kitted out bus “Priscilla”, which was custom built. 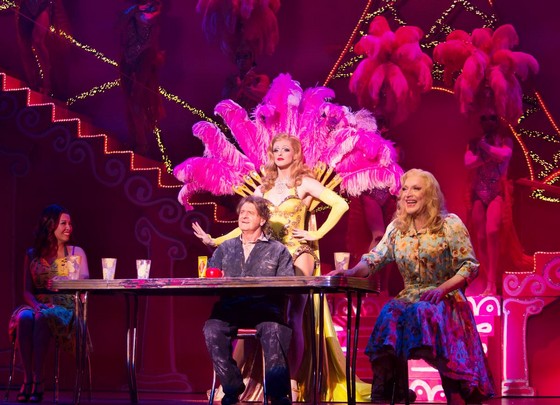 The musical numbers are a sheer delight. Let me share some of them with you – “It’s Raining Men”, “What’s Love Got To Do With It?”, “I Say A Little Prayer”, “Don’t Leave Me This Way”, “Go West”, “I Love The Nightlife”, “True Colours” and “I Will Survive” – and that’s only in the first act. After the break, you get to hear “Shake Your Groove Thing”, “Girls Just Wanna Have Fun” and “Boogie Wonderland”, among others.

The three leads are superb. I have already mentioned David Spencer filling in for Tony Sheldon as Bernadette. David Harris plays Mitzi and Euan Doidge is Felicia. Robert Grubb is cast as Bob, who has a man crush on Les Girls in general and Bernadette in particular. The only other returning cast member from the original season is Lena Cruz, who plays Bob’s wife, Cynthia, in effusive style.

Priscillia Queen of the Desert: The Musical has stood the test of time. A decade on and 24 years since the film was released, it continues to be a huge crowd-pleaser. This show is colourful, up-tempo and pacey. The humour, often delivered in sharp one-liners, is bold and bawdy. Its message of tolerance remains just as relevant today – if not more so – than it did in the ‘90s.

The staging appears to be more sophisticated than what I recall from a decade ago. It looks great. The costumes (more than 500) and headdresses (upwards of 200) are fabulous. Costume changes happen incredibly frequently throughout the show. Another massive feature is the lighting, which serves to amp up the entertainment and enjoyment. 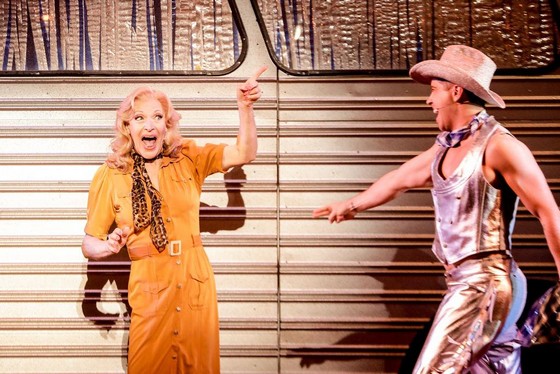 Much credit must go to the original director Simon Phillips, a brilliant man, who is back for more. His career has been on an upward trajectory for longer than I would care to remember. He and the cast and crew have clearly given Priscilla their all. the result is an uplifting night of entertainment that is so much fun.

A standing ovation, wolf whistles and cheers greeted the preview performance I saw, as well it should.

You can buy tickets through Ticketmaster or at prisicllathemusical.com.au. It’s playing at the Regent Theatre in Melbourne until 29 April, before moving to the Capitol Theatre in Sydney on 15 May and then on to Adelaide and Brisbane.