After seasons in Sydney and Brisbane, The Bodyguard: The Musical has taken up residence at Melbourne’s regal Regent Theatre. It’s based on the hit 1992 film starring Kevin Costner and Whitney Houston. The stage production debuted in London’s West End on 5 December 2012. 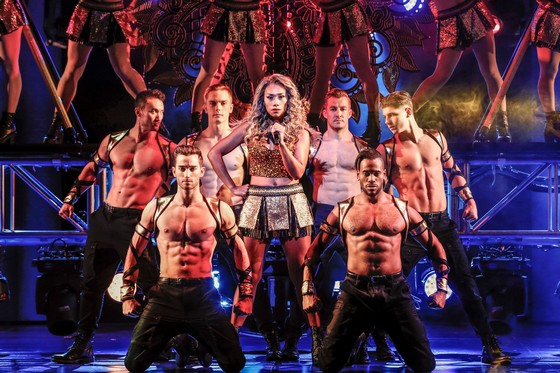 The story concerns a former secret service agent turned bodyguard, Frank Farmer (Kip Gamblin). Farmer is hired to protect a superstar client, singer Rachel Marron (Paulini Curuenavuli), from an unknown stalker. Both Farmer and Marron are strong and outspoken. Each expects to be in charge, but what they don’t anticipate is falling in love.

The two lead female vocalists in the show sing up a storm (they’re great together). The production puts Whitney Houston’s pop hits firmly on centre stage. There are 16 musical numbers in all, including many requiring soaring vocalisation, such as “I Will Always Love You”.

Paulini, who finished fourth in the first season of Australian Idol, works hard throughout, passionately belting out several key songs. She has a real stage presence. Prinnie Stevens (Oh, What a Night!), who plays her sister, has a beautiful, engaging and rounded voice. The pair complement one another. I also appreciated the zest and enthusiasm of the young performer – one of four alternates – who filled the role of Marron’s son, Fletcher.

Despite the seriousness underpinning the central story, the show has a lightweight feel to it. The second act has more substance than the first, and I enjoyed it more.

The Bodyguard: The Musical is colourful and energetic throughout. Mark Henderson’s lighting design is a feature. I dare say the piece will appeal more to women. The opening shocks (as it’s meant to), but the sound mix for the first number was ear-piercing, so much so that the music all but drowned out the vocals. Fortunately, I wasn’t conscious of that from there on.

I was sitting a long way back from the stage and felt removed from the action, so my advice is to buy a ticket in the front half of the theatre if you can afford to do so.

The musical – with book by Alexander Dinelaris (who co-wrote the screenplay for the film Birdman) – features 24 performers, with the orchestra conducted by David Skelton. For those after a fun and lively night of musical theatre, The Bodyguard: The Musical delivers. It is playing at the Regent Theatre in Melbourne until 29 October 2017.