One of the most energetic pieces of theatre I’ve witnessed, Perpetual Frustration Machine is performance art combining circus with a dystopian underbelly.

When we enter the theatre, the four cast members – Debra Batton, Adam O’Connor-McMahon, Seth Scheuner and Stephanie Benson – are engaging in a series of activities. They’re exercising on a mat, cleaning an oven, tapping on a disconnected keyboard and focusing on a single red rose. A voice can be heard saying “change” at increasingly reduced intervals, at which time the performers move to their next “work station”. 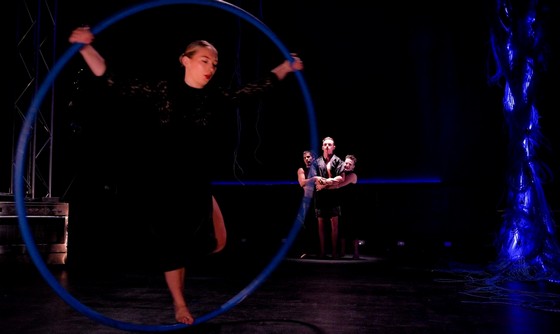 Then, suddenly, the voice says, “there is no change … no relief … the pressure – relentless, merciless. No escape … trapped”. This indicated to me that we’re all on a treadmill. We go around and around, pushed and prodded and poked, and then we die. My thoughts were interrupted by the continuation of the patter from the said voice, which indicated “the only thing in the universe is drive … and drive hates its inability to be satisfied”.

Then the actors perform a series of vignettes, as a group, in couples and individually. These inevitably involve great dexterity, core body strength, balance and perfect hand to eye coordination. They express envy, desire and separation, along with a much darker death wish.

Some of the material is frenzied. The quartet hurl themselves across the floor and even a table. They “play” with confectionery, walk over shards of broken glass and ceramics and toss darts at an ironing board … and at each other. Aerial feats are also part of this equation, along with a hoop as broad as a spread-eagled human and a pair of crutches used as angel wings. I took a ray of hope from the ending, which equated pain and frustration with positivity.

As you’ve gathered by now, this is hardly conventional theatre or traditional circus. Rather, it is a mind-expanding experience, resplendent in its physicality. 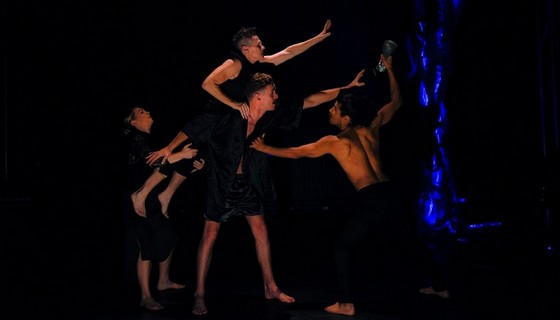 All this is the work of co-creators Stephen Sewell (the writer) and Zebastian Hunter (the director). They’ve imagined a circus drama inspired by the seminal works of French psychoanalyst and philosopher, Jacques Lacan. The staging involves blue strands of fluorescent lighting, wads of electrical cabling and a lattice-like metal frame (the set and costume designer is Stephanie Howe).

Perpetual Frustration Machine is a world premiere work. It sets minds and pulses racing by pushing the limits.
I was challenged, engaged and involved throughout. It’s on at Theatre Works in St Kilda, Melbourne until 23 December 2018.