All For One is a slick documentary about the first Australian professional cycling team to compete in the Tour de France. 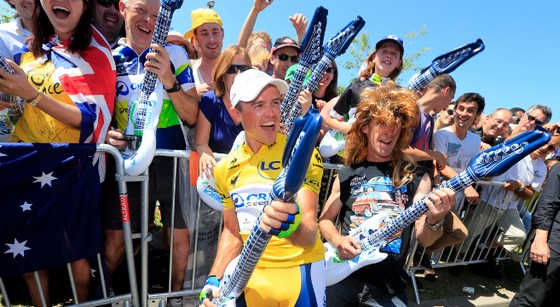 In 2010, Australian businessman and entrepreneur Gerry Ryan decided to start his own team. He took a non-traditional approach. GreenEDGE didn’t just select riders because of their results. They picked riders on their personalities. They had to integrate into a culture based on hard work, but also enjoying themselves outside of racing.

GreenEDGE became known as the ‘fun’ ones in the pro peloton. Their antics included viral lip syncing music videos during a grand tour, cooking tutorials and clips highlighting the riders’ home towns. The team’s success and popularity inspired Jones to propose a feature length documentary. Over the next few years, he gained unprecedented access.

The filmmakers conducted more than 50 interviews for the documentary. The film gives the impression that, unlike the “robotic” overseas teams, the professionals in GreenEDGE also know how to let their hair down. While it’s all about team goals, there are also personal ambitions realised.

So much of this doco is emotionally arresting. Its visuals are alluring, including its “unplugged” components. The directors have done a fine job tapping into GreenEDGE’s ethos, including a selection of the highs and lows.

All For One is inspirational and thoroughly engaging. Importantly, you don’t need to be a cycling buff to appreciate what is on offer here. Rated M, it scores a 7½ out of 10.