Agatha Christie is the world’s best-selling author. Some 2 billion copies of her crime and mystery novels have been sold. She wrote 66 novels; 33 of which feature her famous creation, the arrogant but brilliant Belgian sleuth Hercule Poirot. Many of her books have been filmed to varying degrees of success, although apparently Christie herself was unhappy with many of those movies. Sidney Lumet directed arguably the best adaptation – the lavish 1974 version of Murder on the Orient Express. It featured an all-star cast including Albert Finney as Poirot, Sean Connery, Richard Widmark and Ingrid Bergman (in an Oscar winning performance). Murder on the Orient Express was also filmed as part of the Poirot television series featuring David Suchet, who, for many, delivers the definitive portrayal of the famous detective.

This new version also features an all-star cast, but somehow is not quite as memorable as those earlier versions. This new version has been adapted by screenwriter Michael Green, who wrote the recent Blade Runner 2049. Green has tweaked Christie’s story so that it doesn’t slavishly follow the 1974 version and contains a few new twists. Many viewers will already know the twist ending, so this film is not so much about the destination but the journey. Green gives us a new prologue to introduce to Poirot and his peculiar quirks – and his deductive abilities. Like Christie’s novel though it draws inspiration from the infamous Lindbergh kidnapping to provide the backstory to the horrific crime. 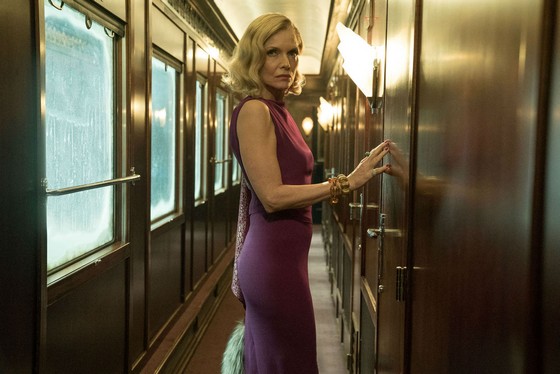 It is 1934. Poirot (played here by Kenneth Branagh) has just finished an investigation in Palestine. He however needs to return to England for another investigation. Thanks to some help from his friend M Bouc (Tom Bateman), Poirot manages to secure a last-minute seat on the luxurious sleeper train the Orient Express. He shares a carriage with an interesting assortment of strangers from different walks of life.

A snow fall temporarily derails the train. The passengers are stranded high atop a mountain pass while they await a rescue party. Samuel Ratchett (Johnny Depp), a sleazy American art dealer and conman, approaches Poirot and offers him a job as a bodyguard for the duration of the trip. Poirot declines, preferring to read Dickens in his cabin. Then overnight, Ratchett is brutally stabbed to death. Poirot begins to investigate.

Branagh gives us a new take on the iconic detective. He hints at a more emotional backstory and he accentuates his eccentricities. But he also plays Poirot as a bit of a pompous braggard. Christie apparently was not a fan of Albert Finney’s moustache in the 1974 film, so one can only imagine what she would make of the monstrosity that Branagh sports here. It makes him look more like Wild Bill Hickock. However, Branagh has said that he drew on the physical description from the book.

But Branagh also turns Poirot into more of an action hero here as he chases a suspect down a snow-covered railroad bridge and engages in fisticuffs with another suspect who takes a pot shot at him. These touches are obviously a concession to modern audiences who won’t sit still for long periods of dialogue or lengthy exposition. That being said, Poirot’s lengthy exposition here is nowhere near as lucid or as detailed as that in the earlier film.

Branagh’s Poirot dominates proceedings, so few of the rest of the cast get much of a chance to really develop their characters. The audience doesn’t get much of a chance to empathise with them either. In the role previously played by Lauren Bacall, Pfeiffer does well and brings an icy quality to her performance. Gad also gets plenty of screen time and delivers a nicely sleazy performance, while Odoms also gets time to develop his character. Dench though is largely wasted and given only a few lines of dialogue; but she still brings her imperious manner and trademarked disapproving scowl to her character.

Branagh himself directs the film – this is his 16th film as director. He gives it a stylish, and suitably old-fashioned, feel. Technical contributions are all excellent, and the film reeks of 30s period authenticity. Alexandra Byrne’s costumes are very good. The film is handsomely mounted, with some great production design from Jim Clay (Children of Men). Clay’s effective recreation of the  luxuriously appointed art deco interiors on the train gives audiences a sensory experience.

Branagh’s regular cinematographer Haris Zambarloukos (Thor) shot the film in widescreen 65mm format, and it looks superb. Zambarloukos also moves the camera around through the claustrophobic sets, giving us a better sense of the confined space and to add a bit of energy to the otherwise stagnant sequences in which Poirot questions the suspects. He also gives us lots of sweeping shots of the snow-covered mountain vistas. This is the first film that Branagh has shot in this format since his Hamlet two decades earlier. He uses the same 65mm cameras that Christopher Nolan used on his recent WWII epic Dunkirk. The CGI effects are also quite effective.

While it lacks a certain pizazz and tension, this Murder on the Orient Express is still an interesting take on an 80-year old tale.It’s a journey that many will find worth taking. And while the film sets itself up for a sequel and a possible new franchise, I’m not sure that many will want to take another journey with this incarnation of Hercule Poirot.