Noni Hazlehurst is unrecognisable as dishevelled vagrant Christie, wandering about the rubbish that litters the Cremorne Theatre’s ramshackle staging in Mother. Christie is a homeless alcoholic, sorrowful but resolute in her attempts to survive on the suburban fringe of Melbourne. And Hazlehurst inhabits her just as Christie inhabits the littered debris of Kat Chan’s set design. 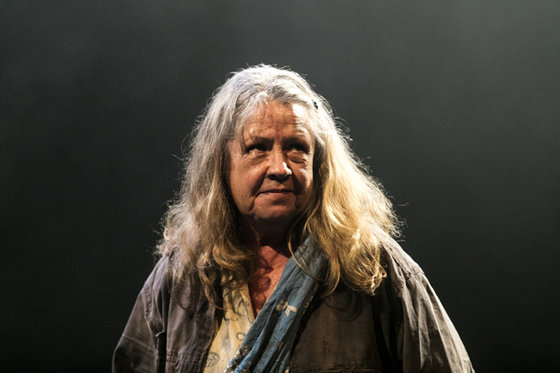 This is Daniel Keene’s moving and profoundly thought-provoking play, a story that is deeply emotional by its very nature. Hazelhurst’s performance is a highly-nuanced one of observational detail. And in conjunction with Matt Scholten’s subtle direction, it elicits an empathetic rather than pitiful reaction from many audience members as she relates the tragic episodes of her unfortunate life. She recalls her life of being misunderstood by her husband Lenny, affected by post-natal depression and granted meagre access to her baby son.

Things start with the overt but authentic “so he said, so I said” recall of conversations past before Christie’s story ebbs and flows through tragedy and the comedy that is needed to endure it. Foul-mouthed at times, she stoically finds the humour in life and we easily laugh along with her until we are touched by her truths. Darius Kedros’s grim soundscape and Tom Willis’s perceptive lighting design guide us through the changing tones of her narrative.

A 70-minute one-hander, while Christie’s is an individual story, it is also a universal one, and, as such, it serves to give voice to the disposed in our society. And if not touched by its theme of motherhood, audiences may also leave with consideration of the notion of legacy and who will be the last to remember us.