A delightful Indiana Jones-like mystery, Miss Fisher & the Crypt of Tears features colourful characters, lavish costumes and magnificent locales. While this is her first time on the big screen, stylish private detective Phryne Fisher built a solid following in books by Kerry Greenwood, which date back to 1989. Phryne also appeared in three series of Miss Fisher’s Murder Mysteries on TV between 2012 and 2015. 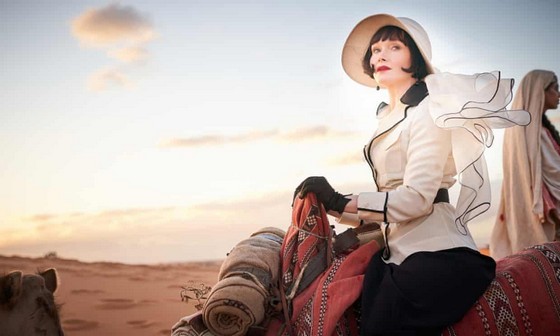 In Miss Fisher & the Crypt of Tears, Phryne Fisher (Essie Davis) is wanted for questioning in Jerusalem, but slips the web. She’s on the case of a young Bedouin woman, Shirin Abbas (Izabella Yena), who has been jailed unfairly in the same city. Miss Fisher manages to break her out of prison and we next see both in London. Shirin’s uncle is in the city for negotiations with the British over a lucrative agreement, but not everything goes accordingly to plan. And there’s more here than meets the eye because Shirin’s family was slaughtered and a curse placed on a priceless emerald. Before it’s over, not everyone will survive and Miss Fisher must get to the heart of the mystery.

Miss Fisher & the Crypt of Tears takes place in exotic 1920s British Palestine and in opulent London manors. It was filmed on location in Morocco, and in Melbourne’s historic mansions. Writer Deb Cox and director Tony Tilse both have experience in television.

Undoubtedly the film’s standout is Essie Davis, who is superb in the lead. She looks great (Margot Wilson is responsible for costume design), acts up a storm and is the glue that binds this triumphant Australian production – which is bound to have many fans – together. Her character runs rings around the hapless men in the piece, including her paramour.

Sure, you could pick holes in the preposterous plot, but that would not be in keeping with the spirit of the picture – namely light-hearted fun. To get the most out of it, you need to suspend belief and accept the cartoon nature of the narrative arc. Breaking a prisoner out while wearing a haute couture red dress is but one example (by the way, I loved the ensemble).

I admired the fact that the actors – many familiar, such as Jacqueline McKenzie, John Stanton, John Waters – actually managed to keep a straight face through a number of the scenes.

Crowd funding was ultimately what got the film made and those who backed it deserve plaudits.