In Midnight Family, the audience become front seat passengers riding along with the Ochoa family in Mexico City after dark. Underground private ambulances compete for patients, beg for money and pay police bribes. The government operates fewer than 45 emergency ambulances in Mexico City for a population of nine million. The documentary explores urgent questions around healthcare, the failings of government and the complexity of personal responsibility. 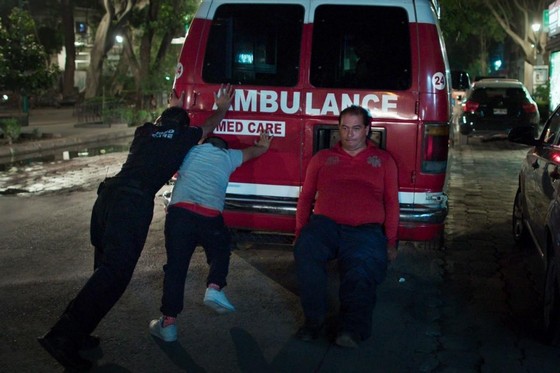 Making a living for the Ochoas and others like them is difficult at the best of times. They work hard and they take their work seriously, often transporting seriously ill patients. Written, shot, edited and directed by Luke Lorentzen, the film exposes an ethical dilemma at the heart of what is a decent family doing some heavy lifting.

Father Fernando and his sons, 17-year-old Juan and Josué, 9, are accompanied by Manuel Hernandez. The Ochoas started their unlicensed business in the late ‘90s after buying a retired ambulance from Oklahoma. Using their network of police contacts, the Ochoas pay a 300 peso (about $20) bribe for every accident call sent directly their way. When they’re “lucky” enough to arrive first to the scene, they charge patients up to 3800 pesos (approximately $250) to transport them to a hospital, but many can’t or won’t pay. And the Ochoas can’t force them to do so. So many days they earn nothing and their situation isn’t helped by increased local police vigilance.

Midnight Family is an eye-opener. I was left asking how a system like this can possibly be allowed to operate in a thriving metropolis. Further, if the Ochoas are the good guys, what about the less scrupulous operators?

Lorentzen – who moved to Mexico City in December 2015 and lived around the corner from the general hospital – had unrestricted access to the Ochoas’ daily routine for six months. He made it count. Midnight Family isn’t about neatly set up talking heads. The whole thing is fly-on-the-wall stuff, with the camera capturing a series of situations involving racing to the scene of an incident, transporting the injured to hospital and interactions with police.

The Ochoas operate within an inherently corrupt, dysfunctional system, trying to scrape by … like millions of other Mexican families. Do they cross the line? You be the judge.

You can see it now on DocPlay.