Talk about the power and passion. Iconic Australian band Midnight Oil has always had that in spades. Now the new documentary Midnight Oil 1984 captures that in their heyday; when they were reshaping the lives of young Australians. This is a grass roots band that went about the business its own way. It didn’t chase radio airplay or Top 40 notoriety. It didn’t kowtow to music label heavyweights. Pubs were their “thing” – not large concert venues – at least initially, before they opened up their music to the world. 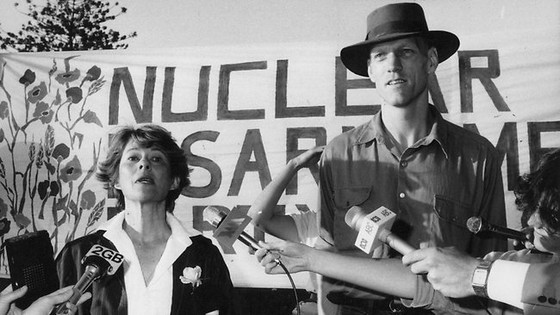 The mateship between band members is front and centre in this doco, which pivots around unique front man Peter Garrett – the man whose dance moves were as noteworthy as his social commentary, not to overlook that on stage he was all but permanently bathed in sweat.

When Garrett stood for election for the Nuclear Disarmament Party in 1984, it coincided with the release of the album Red Sails in the Sunset. The band held its collective breath. The message Garrett was advancing was one that kicked off Midnight Oil in 1976, so all were in step. But the question was how could Garrett be a full time senator and continue to make music?

Fortunately Ray Argall, who directs and edits the movie, shot the proverbial out of the band in 1984. Argall worked with Midnight Oil between 1982 and ’86 and was responsible for their music videos. He travelled with the Oils on their Australian Red Sails tour. On the tour, he filmed their live performances and behind-the-scenes footage. This never-before-seen material – which lay dormant for 30 years – provides a window into a band in a state of change.

That raw footage is mixed with contemporary interviews with band members and a others (10 people in all), giving us a rounded picture of the music and political scene at the time. What comes across is that this group genuinely loved playing together. Garrett’s unrestrained energy was infectious. The music they created (we get to hear parts, if not all, of 26 songs) resonated deeply with their die-hard fans. The messages in their songs, and later the expressions of nuclear disarmament preached by Garrett, had a strong impact that transformed the political landscape.

I walked out of Midnight Oil 1984 re-energised.