Lee Alexander McQueen set the fashion world alight when he burst onto the scene. He was also deeply troubled through various periods of his life. The beautifully shot and illustrated McQueen is a sanitised version of that life. 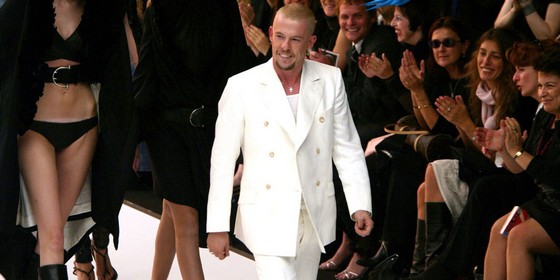 The youngest of six children, he was born in a working-class London neighbourhood in 1969. His family expected him to become a plumber, a bricklayer or possibly a taxi driver like his father. He wasn’t a brilliant academic but loved to draw. His mother was a big influence; encouraging him to pursue his passion. His fashion career began with an apprenticeship at an old-school Savile Row tailor. He went on to be named British Designer of the Year four times between 1996 and 2003.

Like many of these documentaries, we learn about McQueen through interviews with close family, friends, boyfriends and those who worked for him. And, not surprisingly, we get access to never-before-seen archival footage. Presented in five chapters, McQueen highlights the pivotal moments in the designer’s life as expressed in some of his most personal and iconic shows.

With a surfeit of red and black, “Jack the Ripper Stalks His Victims” was the name of his 1992 graduate college collection. “Highland Rape” was his most controversial early show. “Search for the Golden Fleece” was the first collection he designed for fashion giant Givenchy; while “Voss” explored beauty and madness. The final chapter, “Plato’s Atlantis” charts the journey from a collection dedicated to his great friend and muse Isabella Blow after she committed suicide, to the otherworldly final show he produced before he took his own life in 2010.

For all that we find out about Alexander McQueen though, there’s still plenty missing. We can see the rebellion, but the film gives few insights into his dark times. That’s what the best documentaries, such as Amy, do. For instance, we learn about McQueen’s cocaine use, but the reference is made in passing and we quickly move on.

I took away from McQueen that there was a lot more left unsaid. Nevertheless, we certainly get a feel for a man who was a shooting star in the fashion industry before he crashed and burned.