Questions of morality and decency are at the heart of an outstanding comedic drama concerning the interactions of two night security guards and two police officers in New York.

Jeff (Charles Grounds) was booted out of the navy after three years for dope smoking, something his father – who was a naval hero – was ashamed of. Now 27, Caucasian Jeff had trouble finding another job after that but  finally got a second chance working in security at a firm where he has been for the past nine months.

His boss is a no nonsense, by the book African American man by the name of William (Victory Ndukwe), who started at the firm when he was only 16. Now he’d be in his 40s. William thought nothing of firing an employee who was two years away from retirement for sleeping on the job, just one of the things he won’t tolerate.

Jeff is a jokester and an avid talker, both of which serve to frustrate William. Jeff lives with his older brother and his brother’s wife and children, but is trying to save enough to get his own place and pay back a small debt to his brother. The job is routine and dull … and Jeff gets lonely. When he sees William, he uses every opportunity to wind him up, but he also respects him for the fact that William gave him a break when he needed it.

William has bigger problems though. He has always been straight as a die, but not his brother who got in with the wrong crowd early in life. Now, his brother stands accused of a heinous crime alongside two known offenders. The brother’s girlfriend tells William to concoct a story that he was with his brother when the crime was committed. William is torn between sticking to his scrupulous honesty or going along with the lie to try to get his brother freed. He confides in Jeff.

Bill (Ryan Murphy) is a career cop well on the road to becoming a detective. He goes out of his way to help people and is known for doing so. He’s just received another meritorious conduct commendation – his fifth.

He is partnered up with a rookie cop, Dawn (Monique Fisher), who is only three months out of the Academy and still very much has her “L” plates on. She is dealing with the impact of a traumatic shift during which she used her baton to subdue a large drunk man who ran at her. In so doing, she badly injured him and he has been hospitalised as a result. Now she and the force will face a lawsuit.

Bill – a married man with children – sticks up for her. Clearly, he is taken by her and she greatly admires him. The two flirt. The pair calls into the apartment block where Jeff works. Bill goes upstairs to visit one of the residents on a private matter. Dawn stays behind and Jeff – who also has the “hots” for her – awkwardly tries to engage her in conversation. It doesn’t go well. Nevertheless, the words exchanged forever change the way Dawn perceives her partner Bill. In turn, when Bill hears about William’s brother’s plight, even though it isn’t his case, he reaches out to William to try to help in any way he can. That overture also turns sour.

Superbly written by Kenneth Lonergan and first seen off-Broadway in 2001, I love the constant shifts in dynamic which expose vulnerabilities and chinks in the players’ armour. Dominant one moment, they are exposed the next. That makes for a totally involving experience because the actors who perform the roles are so believable.

Each of them is mighty. In fact, here we have four stellar showings, led so admirably by Charles Grounds as Jeff. He is a genuinely funny man child trying to become a more responsible member of the community and own his own actions and thoughts, but still struggling with that. William thinks he has it all together, with a clear future direction until he is blindsided by his nearest and dearest.

Bill, too, has a one-way trajectory in the force until he is caught out. Then we see another, far darker and more manipulative side of him. Ryan Murphy can be truly frightening. Dawn worked out early on what she had to do to get ahead. She was a woman in a man’s job and the boys’ club is alive and well. Integrity is all she has, but infatuation is a blinding light until the harsh reality dawns.

So, in Lobby Hero who is honest, who is decent, who is manipulative? What is the right thing to do and how does this reflect on the human condition? 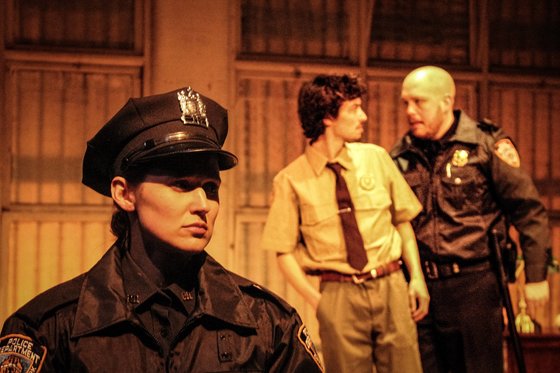 The set, designed by Juliette Whitney, captures the work environment most effectively. Stage right is a small wooden desk with a banker’s lamp, behind which sits a pot plant. At the rear of stage left are a couple of armchairs and a small coffee table. In the foreground is a coffee making machine. The entrance to the apartment is marked by two thinly drawn plants, while a long green runner constitutes the hallway past security.

At 2 hours 20 minutes without interval, Lobby Hero may be a long sit, but it is highly engaging from the get-go and holds you in a vice-like grip throughout. Skilfully directed by James Vinson, it is playing at fortyfivedownstairs until 27th October, 2019.