Big Brother is watching your every move and is judging you … harshly – very harshly indeed. In the case of Int, Big Brother is a “she” and she appears to have a firm grip on you; at least initially. That is what I took away from this 50-minute, one woman performance art piece – a polished role from Carolyn Rose Dawes, 25, a most considered and naturalistic actor.

As we enter the theatre, we are immediately struck by the stark image in front of us. A woman dressed in a short, navy blue dressing gown is lying on the ground, without movement. Around her is strewn a cacophony of clothing. On a white chest of drawers, rustic in appearance, sits an open make up case. Underneath it are several pairs of shoes. She and the contents are trapped inside a clear, plastic bubble – in the shape of a cube, to be more precise.

Suddenly, to an infernal drumbeat, she wakes in fear, clearly unable to extricate herself from her predicament. She looks longingly at her make up box and begins application. But when it comes to her choice of jewellry and clothing, Big Brother is dismissive, belittling and profane – the master’s voice, which turns into a diatribe, being the first spoken words we hear. 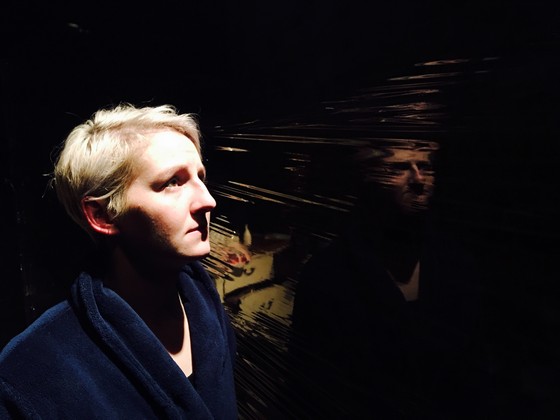 The more BB sounds off, the more the woman is intimidated and subjugated. She screams and collapses, only to awaken again and again in panic to undergo the same ritualistic nightmare. Finally, when she finds a way to break the cycle, her odious controller evaporates (Big Brother has been eviscerated) … and her metaphorical shackles are removed. Carpe diem – she seizes the day and suddenly, for the first time, she has a future.

That is my reading of this world premiere work, created by Dawes and Toby James Rice. There is no yardstick for just how one should interpret what is going down. Suffice to say, Dawes the performer makes you think and feel. She evokes an emotional response to her art, which is what esoteric material such as this is designed to do.

Those used to conventional narrative may find the going tough, but there is certainly a place in the creative arts for the more obtuse … for those that see the world in different hues. Int, for a select audience only, is on at The Owl and Cat Theatre – 34 Swan Street, Richmond – until 19th May.