Think back to all that was good about the 1950s (consider the fashion, architecture and styling … and if you can’t because you have either forgotten or weren’t yet born, then simply Google it). That is how Judy (Nikki Shiels) and Johnny (Toby Truslove) have decided to live their lives in the Australian premiere of Home, I’m Darling.

It is the present day in the UK and yet this is their new reality, but just how realistic is it? She took a voluntary redundancy package from a better paid job than what her husband earns from real estate listings and sales to live the life of a dutiful housewife, with all that entails. I speak of all of the household chores, let alone making his lunch each day, preparing an alcoholic beverage and lovingly laying his slippers by the door for his return … and, naturally, delivering the evening meal.

At the start of the play Judy and Johnny both declare how blissfully happy they are with the arrangement (which has been in place for three years, even though they only agreed to trial it for six months). Suddenly, something unexpected happens to throw Judy off kilter. Her BFF, Fran (Susie Youssef), who is over for a visit, tells Judy she spotted Johnny at a pizza joint at the new shopping centre … with a woman.

Judy is clearly upset and confronts Johnny when he comes home that evening. He assures her all is fine and that although he was, indeed, at a pizza restaurant with a woman, that woman was his new boss, Alex (Izabella Yena), somebody he is trying to impress. That is because there is a promotion up for grabs at the office … and Johnny has been there the longest.

Johnny isn’t too fussed about rising up the ranks, but Judy is. That is because under their arrangement they now have only one income and the couple is under severe financial pressure, only Johnny doesn’t know it because she is keeping it from him. So, it turns out their idyllic lifestyle isn’t so idyllic after all … and something has got to give.

There are also a couple of other sub plots in Home, I’m Darling, one involving Fran’s husband, Marcus (Peter Paltos), and the other Judy’s relationship with her mother, Sylvia (Jane Turner).

A cleverly conceived and written comedy by Olivier Award-winning playwright Laura Wade, the play is also imbued with high points of drama and pathos. All the performances are grand – none better than Nikki Shiels as Judy, who has longed to live her fantasy life for as long as she can remember. Toby Truslove is the perfect foil as her husband, who has been having misgivings for some time. Truslove’s lightness of touch works beautifully against the various sides to Judy’s character – the dreamer, the schemer and the sufferer.

The secondary players also impress in realising well-formed and decidedly distinct characters that are a pleasure to watch in action. Among them, as straight shooter Sylvia, Jane Turner delivers a withering monologue about what it was really like to live in the ‘50s.

The set – think Henrik Ibsen’s A Doll’s House – is spectacular. A lit up, wooden ‘50s window with planter box below set against a jet-black backdrop greets you stage left as you enter the theatre. As the show starts, the huge set in its full glory is revealed. I speak of an intricate two-tiered period home, complete with kitchen and living room downstairs, a carpeted staircase and a bathroom and bedroom upstairs. 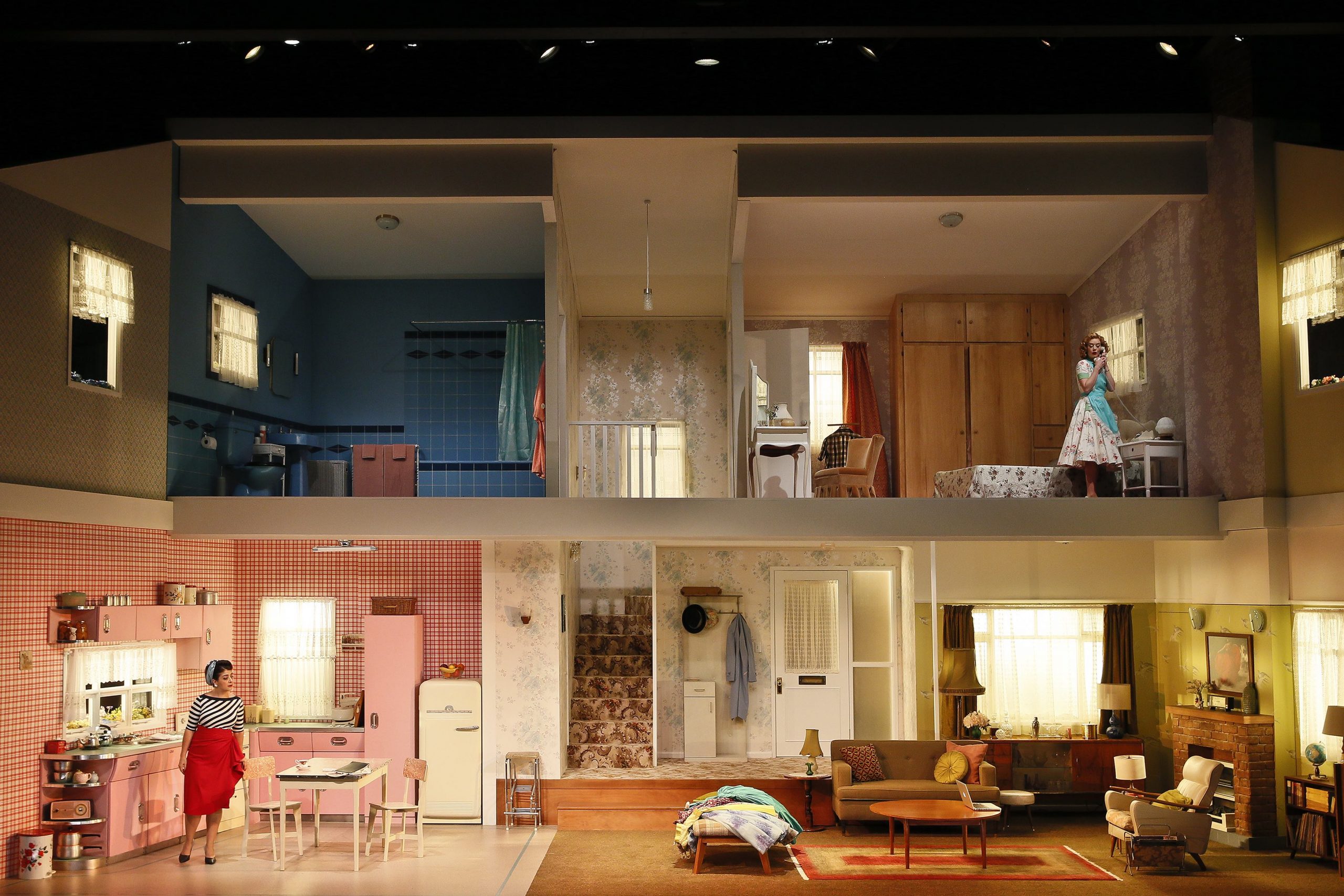 And what a treat the costuming is, particularly that lavished upon Judy, notably the tuille swing dresses. The creative spark behind both sets and costumes is Renée Mulder.

Skilfully directed by Sarah Goodes, Home, I’m Darling makes for engaging and entertaining theatre and marks a strong start to season 2020 for MTC. It is playing at Southbank Theatre, The Sumner until 29th February. I saw the first preview performance.