A charming Australian comedy about a serious subject, H is for Happiness is a surprising gem. Set in the West Australian coastal town of Albany, this is a feel-good film for all ages. Writer Lisa Hoppe adapted My Life as an Alphabet by Barry Jonsberg for the screenplay. The film tells the story of a 12-year-old’s determination to bring her family back from the brink and spark renewed happiness in their lives. 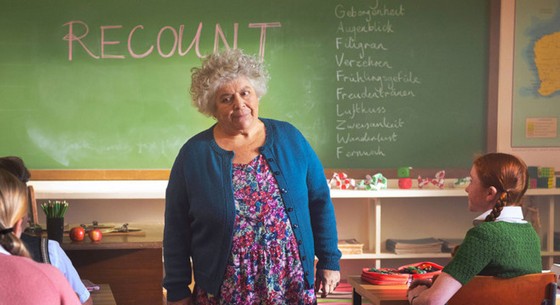 The ever-optimistic Candice Phee (Daisy Axon) worries about her parents. Her mother (Emma Booth) has shut herself off from the world after Candice’s baby sister died from cot death years earlier. Her father (Richard Roxburgh) has fallen out with his brother, Rich Uncle Brian (Joel Jackson). Into Candice’s world steps Douglas Benson from Another Dimension (Wesley Patten), the new kid in her class. Douglas has his own problem – he believes he is visiting from another space-time continuum and is determined to return. He thinks he can achieve that by plummeting from a tree in a forest where a miniature horse lives.

H is for Happiness looks at a beautiful part of Australia through the eyes of a quirky outsider. It’s a decidedly different take on themes of family, friendship, loss, grief and acceptance.

Daisy Axon totally nails the lead as a intelligent Candice. As Douglas, Wesley Patten is her perfect foil. He, too, doesn’t miss a beat. Alessandra Tognini does a good job nailing the aloof popular girl Jen Marshall, even though we’ve seen the character many times before. I loved Miriam Margolyes as the class teacher with an odd eyeball. Catherine Moore is the no-nonsense fill-in teacher. Emma Booth brings vulnerability to Candice’s depression-hit mother. Joel Jackson has fun as the cardboard cut-out rich uncle, while Deborah Mailman has a small and sympathetic role as Douglas’s mother, Penelope. And I mustn’t forget George Shevtsov, who has a star turn near the movie’s end as a local costume shop proprietor.

Sheedy brings a wonderous, pantomime-like quality to H is for Happiness. You can lose yourself in a film like this and allow yourself to dream. It’s a movie that will appeal to children, parents and grandparents alike. We need more inventive creations like it.