Although billed in some quarters as “Hamilton: The Movie”, the Hamilton now streaming on Disney + is more of a filmed version of the stage production. Director Thomas Kail (Fosse/Verdon) captures a 2016 performance of the groundbreaking musical at the Richard Rodgers Theater in New York. The performance features the original Broadway cast, including Lin Manuel Miranda in the title role. And given its impact on theatre internationally, this is pretty much the Holy Grail for theatre nerds around the world. 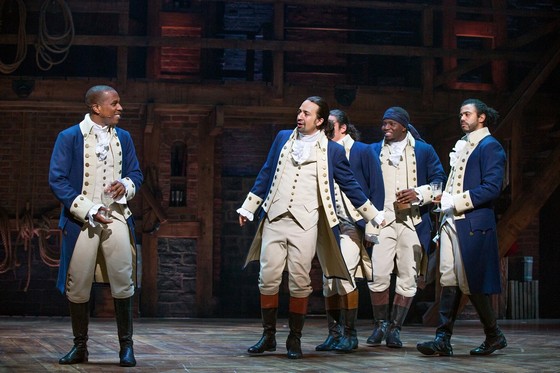 For those who aren’t familiar, Hamilton tells the story of Alexander Hamilton, one of the Founding Fathers of the USA and a key figure in the American Revolution. The twist is that all the roles (bar one – King George III, played by Jonathan Groff) are played by people of colour. The idea of African-Amercians portraying these figures from American history (and let’s not forget, many of them were slaveholders) was both jarring and exciting. To emphasise the point, Miranda’s score for the musical features a considerable amount of hip-hop, R&B and jazz – uniquely Black musical forms – alongside showtunes (which, you might argue, are the ultimate White musical form).

The production (which includes a one-minute “intermission” – even though you can pause it) plays out over two acts. Act I basically covers the period from Hamilton’s rise to prominence until the end of the Revolutionary War. Act II deals with Hamilton’s life and work after the war until his death. Along the way, the “big guns” of American history feature prominently. Key among them are Thomas Jefferson (Daveed Diggs), George Washington (Christopher Jackson), James Madison (Okieriete Onaodowan) and of course, Hamilton’s nemesis Aaron Burr (Leslie Odom Jr). The show also finds space to spotlight two major female influences on Hamilton, his wife Eliza (Phillipa Soo) and her sister Angelica Schuyler (Renee Elise Goldsberry).

Kail faithfully captures the energy of the live performance. The songs are vibrant, the stagecraft exciting and the costumes (mostly) minimal but brilliantly effective. You can see why this production swept all before it and changed theatre as we knew it. Kail however elects to alter the in-theatre experience somewhat. His camera occasionally zooms in on the actors’ faces, or on one particular character – something to available to theatre-goers (particularly those in the cheap seats).

Just a couple of clarifications. Hamilton is usually described as a “musical”. Technically, it’s not. All the dialogue and exposition is sung. That makes it opera, if you ask me. It’s also sometimes described as a “hip-hop musical”. It’s actually more accurate to say it’s a musical with hip-hop. Most of the numbers are traditional showtunes, with some elements of other genres sprinkled in.

Lin Manuel Miranda is a huge presence as Hamilton. Naturally enough, he dominates the stage both physically and vocally. Daveed Diggs received considerable acclaim for his dual role as Lafayette (in Act I) and Jefferson (in Act II), and it’s easy to see why. His passion is palpable, even through the small screen. Leslie Odom Jr is a fine foil for Miranda as Burr. But Phillipa Soo and Renee Elise Goldsberry deliver two of the more striking performances as Eliza and Angelica.

But, let’s face it, most viewers will be here for the songs – and they resonate on every level. Many of them will be familiar, but none are ever less than engaging. One surprise is the restrained final number that closes the show; not a hallmark of many Broadway musicals.

If you have even the slightest interest in this production, musicals in general or American history, you’ll want to dive into this impressive filmed experience.

Hamilton is now showing on Disney +