The Ham Funeral is a first play by Patrick White, written in 1947 in post war, blitzed-out London. Set in 1919 it was inspired by the painting by William Dobell known as ‘The Dead Landlord’ and on a story of Dobell’s experience in one of those great crumbling houses in Pimlico.

This play begins with a Young Man in a preamble chat with us the audience: “… Probably quite a number of you are wondering by now whether this is your kind of play. I’m sorry to announce the management won’t refund any money. You must simply sit it out, and see whether you can’t recognise some of the forms that will squirm before you in this mad, muddy mess of eels. As it heaves and shudders, you may even find … you have begun to feed … on memory …” 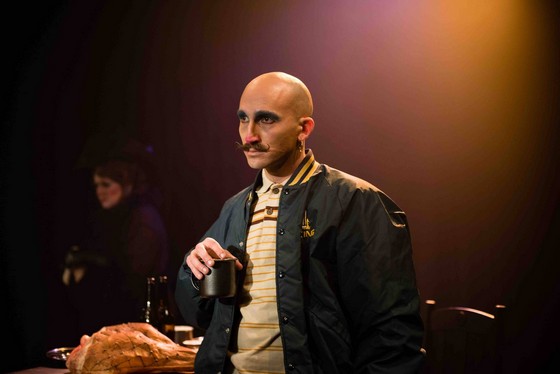 For this play is written by White in a surrealistic mish-mash of styles and genre, with a symbolist visual edge in his language and his images, spurning the usual weight and familiarity of naturalism. It was a puzzlement and was famously rejected by the Adelaide Festival Drama Committee as part of the 1962 event. “it is an abstract type of play which the general public will find difficult, and impossible to understand. It’s complexity will limit its appeal to a few intellectuals and even they would find it difficult to interpret the so-callled psychological aspects of the play.”

It may still be a puzzlement for some and as this is the second production of this play I have seen in recent times, the last by Philip Rouse at the New Theatre, it obviously attracts the ‘daring’ who believe they may have the ‘key’ to unlock it in a theatre for an audience. Kate Gaul and her Siren Theatre Co have entered the creative lists.

When the landlord, Mr Lusty (Johnny Nasser) ‘carks’ it suddenly, Mrs Alma Lusty (Eliza Logan) summons her poet and tenant, the Young Man (Sebastian Robinson), to fetch her relatives (Johnny Nasser, Andy Dexterity, Jane Phegan and Carmen Lysiak) for a ‘ham funeral’ – an arcane status statement to her local community. The aftermath of that funeral and the sexual confrontation between Lusty and the Young Man/Poet, whilst distractingly inspired by a muse, The Girl (Jenny Wu), the other tenant, is the substance of the play.

Designed by Jasmine Christie, on a raised shiny-floor with the back walls black curtained with a central oblong metal table with chairs, swathed in heavy haze, it is lit by Hartley T A Kemp in rich baroque colours, gleaming in the blackness of it all, eking out the exaggerated grotesquerie of make-up and costume of the actors. Other than the poet the physical visuals are of another ‘hot house world’ – burlesque-bizarre. Accompanying the visual promptings is a complex and haunting soundscape by Nate Edmondson that builds up an imaginative invention of a crumbling, damp, mysterious and ‘creepy’, living space. The visuals and sound design are the triumph of this production. 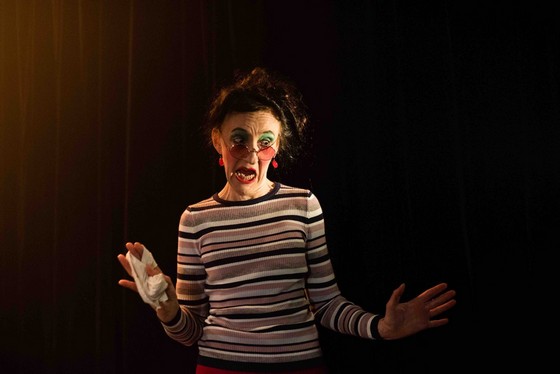 Despite that the language is handled with a careful clarity, it lacks a forward tempo for engaging storytelling – even a variation of tempo is lacking –  it has in delivery, in this production, no flesh and blood urgency – it rather errs as a kind of recited poetry. One could count the seconds between the sentences in the speeches and the cuing from one actor to another, to make the present experience, moribund, even turgid in its musicality – it became exhausting to endure, stewing it’s own rich imagery juices.

Patrick White was a Nobel Prize winner for Literature. His novels are staggering in their greatness and awesome in the demands he makes of his readers. He once told the actress Kerry Walker, who, incidentally, played Mrs Lusty in Neil Armfield’s 1989 production of The Ham Funeral, for the Sydney Theatre Company, that he’d always wanted to be an actor, and that he’d always craved success in the theatre. Seven of his eight plays were written in the sixties and then latterly in the eighties, and are just as challenging as his other writing. Their success was always a matter of personal taste and caused a quarrelling history amongst critics and audience. Only time will tell which side was right. Either, we will catch up to their ‘genius’, or not. Edward Albee became understood with time.

Kate Gaul’s production is of interest for the theatre aficionado and the fans of Patrick White.