Prima Facie is a one-person play by Suzie Miller. It won the Griffin Award for Best Play in 2018.

Tessa is a feisty young woman from a working-class background who finds her talent in the practice of law. In the journey of this play Tessa experiences what it is to be on both sides of the court system. It becomes a devastating revelation. 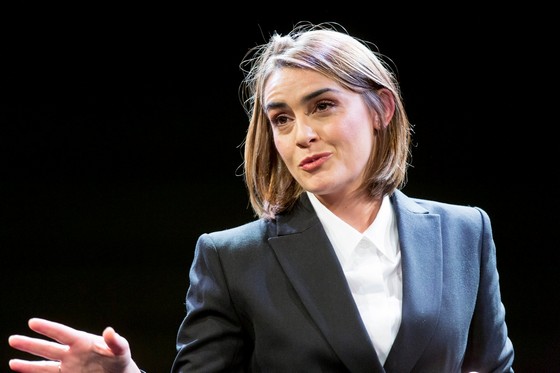 Suzie Miller is a writer who has practised law to subsidise her first love: writing. Many a writer, especially the Australian writer, with this country’s limited opportunities to be able to make writing the lone occupation of their industry and source of a sustaining income, have had to have a ‘second’ job. The Griffin Theatre have presented other works by this writer: Caress/Ache; Sunset Strip. And her career has had support internationally, with many of her works having had nominations for awards of excellence.

For me, Prima Facie is the ‘flowering’ of her gifts, it is a work of high quality, bursting with an intensity of a lived experience and with a missionary zeal of the highest integrity to talk about issues concerning the law and its application to this country’s citizens, underlining the injustice it can wield especially on women. It is a play that says something of great importance for our present day, fearlessly. It has, at its centre, a woman of high intelligence, ambition (and not a sportsperson!). A woman we come to admire and support in her daily interactions in a world dominated by men. What happens in the play becomes an almost unbearable angst for those of us seated in the audience. Prima Facie is the best of the theatre writing that I have experienced from Suzie Miller. Her courage to put this in the public domain is what makes this work glow with irresistible power.

Prima Facie is posed as a one-person monologue. It is a hundred minute journey. A hundred minutes as the lone storyteller on any stage is a truly daunting challenge. The solo actor has no other resource but themselves to develop a relationship with that unrehearsed other ‘actor’ – the audience, which is different every performance (and that is where the act of improvisation/being ‘in the moment’ becomes the other essential ingredient/thrill of being an actor) – to bring them into an empathetic state of sharing so they are able to invent and act the sub-text of what is said and shown to them.

It requires an actor of tremendous technical skill with the resources to cross a great landscape of emotional range and to have the courage to delve into the ‘truths’ of their own self to convince the audience to suspend their judgements, so that they are able to jointly participate in the story and take in the lessons of the play for their lives. Actors, good actors, quite early in their careers divine acting is not an escape from their own life. That it is not a game of ‘pretend’. Rather, acting requires the actor to ‘reveal’ the first hand experiences of their own lives/identity to be the basis of their ability to tell the story of the character.

I have reckoned that the best resource an actor has is their own life, which is made up from the experiencing and conscious gathering of their lived life, supplemented with the secondary resources of other lives which the actor has unconsciously (consciously) observed, with an added intense engagement with the other arts practised about them: dance, art, music, and absorbing what they have to say of our times. Ninety-five percent of every character is essentially the particular actor engaged in the task of revealing the aspects of their self, that, with imaginative expansion or diminishing can create the uniqueness of the character. It takes courage as a craftsman to do such a thing but it is the essential element that is required for any performance to have the possibility of conviction and, sometimes, it can assume greatness.

This is all leading to underline the astonishing performance that Sheridan Harbridge offers to the audience to illuminate the source material of Ms Miller’s story (life experience). Feisty, funny, world wise, street wise, intelligent, committed, arrogant, confident, self aware, prejudiced, observant, skilful, compassionate, confronted, devastated, angry, outraged, courageous, stubborn, humility, are some of the facets that Ms Harbridge shares with us about Tessa, Ms Miller’s woman. What is marvellous is the craftsmanship of Ms Harbridge’s craft, its clever structured revelations that are presented with a sure integrity of judicious selection and restraint. Never does the acting of Ms Harbridge shift into sentimentality – it gleams with intelligence and wit, even taking us into a place of surprised compassion when her Tessa shockingly plunges into a raw emotional pain. We all, willingly, create with her, under her subtle control of our wills/focus, the heart centre of the play’s injustice.

One knows that Ms Harbridge creates a ‘miracle’ of sage revelation when one realises that one has been watching this one woman for 100 minutes. The passage of time is so swift – Ms Harbridge’s clever disguised detail at speed, induces us to reveal ourselves in identifying the commonalities of Tessa’s experience (and gets us through a slightly didactic spell of indulgence from Ms Miller, late in the play), so that the busy contribution of our attention has been so intense that not a single minute of Ms Harbridge’s offers allows us any mind wandering from the centre of the stage. Time had been suspended – a rare experience in the Sydney theatre-going travails. 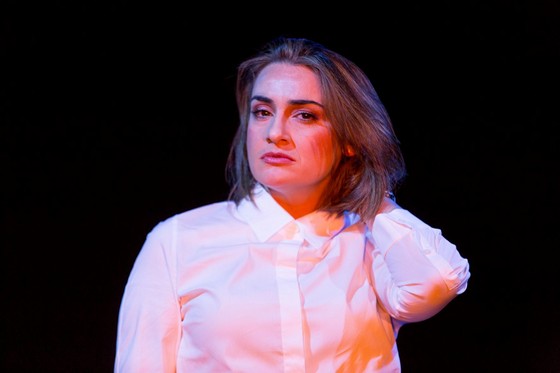 Lee Lewis, the director, after the masterstroke of casting Ms Harbridge, has stepped back and allowed the actor to take possession of Tessa, and permitted the play to take hold of the audience. Her contribution is invisible, but, on reflection, firm. It is the opposite to the overkill that we recently had with the Sydney Theatre Company’s production of Cat on a Hot Tin Roof under the hand of Kip Williams. Gentle visual choices of signage guidance on the walls of the space, along with just a circular platform, in shades of black and white, designed by Renee Mulder and lit by Trent Suidgeest, subtly sound scored by Paul Charlier, are elements that support and focus the actor and the writing without drawing attention to themselves.

Prima Facie is the play we have been waiting for. Ms Harbridge has created the role that should propel her into the front line of casting in this city: magnificent, astonishing. There was, and I hear, is, every night a spontaneous standing ovation for Ms Harbridge’s performance. I teach that an actor is not the ‘high priest’ at the altar of thespis, but is the sacrifice. Ms Harbridge does that for us every night on the SBW stage and merits your attention in a very contemporary work of important debate. Do not miss.