Tom Hanks both stars in and scripts Greyhound. And with his writer’s hat on, he does a pretty solid job in adapting C. S. Forester’s novel The Good Shepherd for the screen. Aaron Schneider – whose last film was the far more unconventional Get Low (2009) – steps into the director’s chair. And the result is a surprisingly effective World War II action-thriller.

Hanks – often in tandem with Steven Spielberg – has had an interest in World War II stretching back to Saving Private Ryan (1998). He’s been heavily involved in series like Band of Brothers and The Pacific, so he’s in familiar territory here. 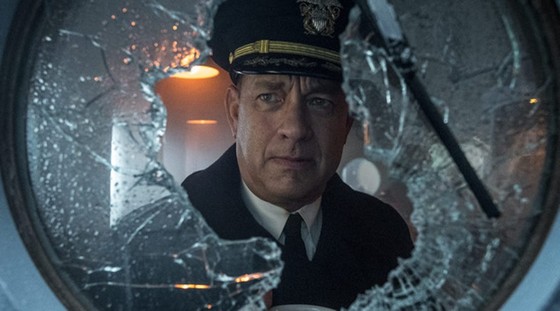 The story revolves around the destroyer USS Keeling (codenamed Greyhound – hence the film’s title). The ship has to escort a convoy of merchant vessels across the Atlantic. While the convoy will have air support at either end, for three days it will be out of aircraft range in the mid-Atlantic – a zone known as the “Black Pit”. The film basically takes place over those three days. During that time, the ships will be at the mercy of German U-Boats.

Hanks plays Captain Krause, an officer taking his first command. He’s left behind a girlfriend, Evelyn (Elizabeth Shue), to do his bit. The perilous journey starts with a taste of success as the Greyhound destroys a lone U-Boat shortly after entering “the Pit”. But things take a dark turn as it soon becomes clear there’s not just one submarine tracking them. A whole “wolf pack” of U-Boats has assembled and is shadowing the convoy, waiting for the chance to strike.

Once the shooting starts in Greyhound, the action barely lets up. Schneider does a good job in ratcheting up the tension as the hours tick by until the ships can reach the safety of British waters. He does so using a lot of CGI. While I was initially a bit distracted by the amount of CGI, after a while I barely noticed it. Schneider intercuts tightly shot (almost claustrophobic) scenes inside the Greyhound, to broad panoramas of ships on the open sea; mostly to good effect.

That said, Hanks’ script largely sticks to the beats of the genre, and doesn’t take a lot of risks (cinematically speaking). It also features a lot of blokes doing blokey things, so generally lacks nuance. One exception however is in the film’s understated treatment of segregation in the US Navy of the period. But it delivers plenty of naval action and personal drama as the sailors face peril after peril.

DOP Shelley Johnson (Captain America: The First Avenger) imbues the whole film with a blue-grey pallor that suits the dark and desperate plot. More importantly though, it allows those scenes with other colours to “pop” more on-screen.  Blake Neely (Supergirl) lends a similarly portentous score, though again I barely noticed it after a while.

Hanks heads a largely unknown cast, and basically has to carry the film. He appears in just about every interior scene, and he definitely has his “Tom Hanks stuff” going on. He adds an air of gravitas and, well, class to the film. Stephen Graham (The Irishman) lends solid support as XO Cole; as does Karl Glusman (Nocturnal Animals) as sonar operator Eppstein. But the talents of Rob Morgan (Just Mercy) and Elizabeth Shue (Battle of the Sexes) are largely wasted in minor roles.

As war movies go, Greyhound doesn’t break the mould. This is straight-ahead, almost old-school, stuff that takes few risks. But as a conventional high-seas action film, it ticks a lot of boxes.