The sad later life of French painter Paul Gauguin is brought into sharp focus in this slow-moving biopic.

The year is 1891. Gauguin (Vincent Cassel) is already well known in Parisian artistic circles. But he’s tired of the so-called civilised world and its conventions. Leaving his wife Mette and five children behind, he ventures alone to the other end of the world: Tahiti. Consumed by a yearning for original purity, he’s ready to sacrifice everything for his quest. 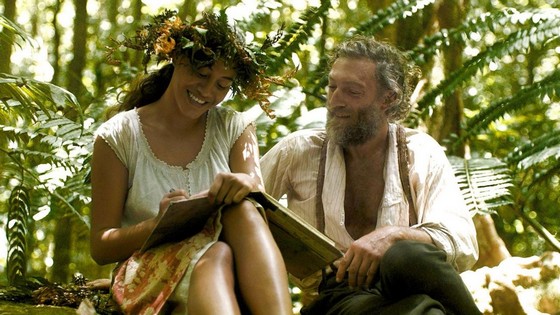 Impoverished, sick and solitary, Gauguin pushes deep into the Tahitian jungle. There he meets Tehura (Tuheï Adams), his muse, who will inspire his most iconic works of art. Life remains far from easy however. Although Gauguin is manic in his commitment to art, making a living from it remains elusive.

Édouard Deluc, who co-wrote and directed Gauguin, freely adapted the work from the artist’s travel diary from his first trip to Tahiti in 1893. Gauguin painted 66 masterpieces in 18 months there.

While everything in the film is based in truth, it’s a romanticised version of the truth. For instance, the key character of Tehura in the film is a composite of many of Gauguin’s lovers. Gauguin is a small film for specialist tastes. It has a lyrical feel to it. Religion plays a role.

Cassel presents Gauguin as a man possessed. His character is at first energised, but gradually beaten down. That arc is characterised by the evolving relationship with Tehura – his “Eve” – as his jealousy takes hold.

Pierre Cottereau’s cinematography captures the beauty and openness of Tahiti. He contrasts that with Gauguin’s cloistered existence in Paris.

On the negative side, while I understand Deluc’s intent, I felt Gauguin at times suffered from uneven pacing. On occasions, it felt positively languid. I also felt that the Paris farewell scene was overplayed. Still, overall you get a good feel for the artist’s predicament and state of mind.

Unfortunately, the world wouldn’t recognise the brilliance in his work until after his death. He died destitute at the age of 54 in 1903.