An ostensibly by-the-book police procedural, Force of Nature nevertheless has a few surprises that give it a kick along.

In New York, Detective Cardillo (Emile Hirsch) is making out with his cop partner (and fiancé). Against the woman’s protestations, Cardillo answers a call of duty and everything changes. Then we cut to Puerto Rico, where a cyclone is brewing and a decidedly suspicious group of men is holed up in a cafe waiting for something to happen across the road. When an elegant, old lady drives up in a luxury limo, two of them spring into action, intending to rob the said person. Only their action nets them a decidedly more attractive bounty, which the ringleader, known as John the Baptist (David Zayas), hadn’t counted on. 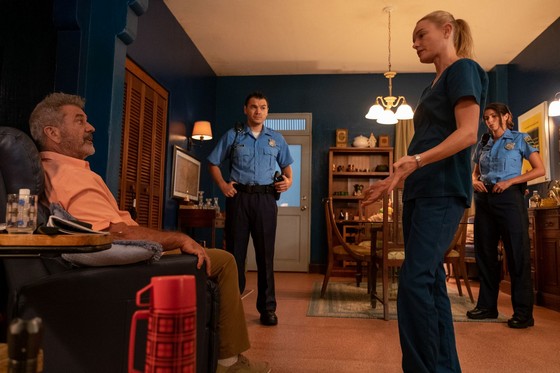 Mind you, that necessitates going to another address, which is where most of the action takes place. It’s also where they unexpectedly encounter Cardillo, whose life has taken a turn. He and his partner for the day, Officer Jess Peña (Stephanie Cayo), have also made their way to the same location after receiving a call regarding a man supposedly hoarding meat – lots of it. Let’s just say there is whole lot more going on here than either of the key parties realise … and not everyone will walk away.

As the rain and wind gusts worsen, a few still refuse to leave the apartment complex. Among them is a grizzled and sickly former cop – Ray (Mel Gibson) – in urgent need of dialysis. His doctor daughter, Troy (Kate Bosworth), wants him to go to hospital. And then there’s elderly German gent Bergkamp (Jorge Luis Ramos), who harbours a secret.

The production values in Force of Nature are reasonably slick,  I felt dismay with Ray’s highly staged coughing fits. And, of course, Ray going from barely functioning to pulling on a bullet proof vest and choosing weapons (for the first time in 15 years) strains credibility. Add to that Bergkamp’s indecipherable English and an unbelievable romantic link. And, unfortunately, the inevitable demise of John the Baptist, was signalled … clumsily.

Still, Zayas conveys an “appropriate” selfishness and total disregard for human life as the leader of the bad guys. I also quite liked the quirkiness meat-hoarder Griffin, as downplayed by Will Catlett.

Force of Nature was written by Cory Miller, who, according to Rolling Stone spent four years as an investigator for the NYPD Internal Affairs unit. It is his first feature film. Direction is from Michael Polish, who is married to Kate Bosworth.

Hardly a world-beater, Force of Nature is rather a lightweight distraction for a rainy day.