Adapted from a 2012 graphic novel by Joff Winterhart, Days of the Bagnold Summer is a gently funny coming-of-age story.

Sue Bagnold (Monica Doland) is a 52-year-old English librarian. She’s raising her son Daniel (Earl Cave) alone. Daniel, 15, is on school holidays and looking forward to travelling to the US to spend time with his father. But a phone call changes that; and Daniel is left to while away the summer at home, with only his mum and best friend Ky (Elliot Speller-Gillott) for company. Daniel, like Ky, is into heavy metal music. But he’s a layabout who expects his mother – who he treats badly – to do everything for him. A war of wills ensues. 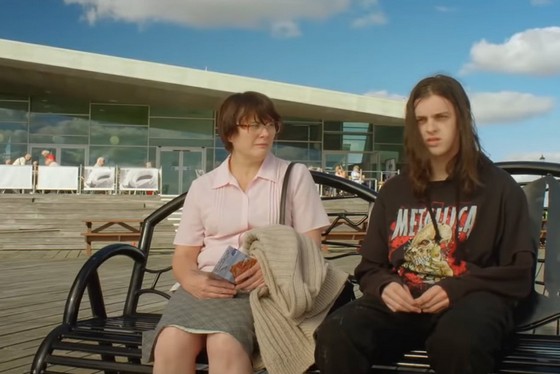 The boy has a big chip on his shoulder. He’s perpetually sullen or angry or both. Even shopping for shoes with his mum for an upcoming wedding becomes a nightmare. Try as she does, nothing Sue says satisfies Daniel, who regards her as an embarrassment and says some particularly hurtful things. One morning, after a run-in the night before, Sue insists that he prepare and hand around his resume to try to attract a summer job. While Daniel does so, what catches his eye is a handwritten note on a notice board reaching out for a singer for a metal band. In his pursuit of the same, Daniel has a falling out with Ky.

Meanwhile, Sue has unexpectedly been invited on a date by Daniel’s history teacher, the smooth-talking Douglas Porter (Rob Brydon). Daniel is suitably grossed out.

The screenplay is by Lisa Owens, while Simon Bird directs his first feature. I appreciated the characterisations of Sue and Daniel. Both looked and acted suitably awkwardly. The film presents as fly-on-the-wall material … like we’re allowed to listen in on a mother and son’s frequent squabbles. Some will appreciate the blitheness of it all. Others, I dare say, will be thinking much ado about nothing. What’s to see here, other than usual teenage rebellion? The film follows a largely negative path until the final chapter, when an incident brings the pair closer.

Monica Doland channels “nerd” particularly well. Loud, metallic music stings punctuate the piece, reflecting Daniel’s musical states and the world he retreats into. Notably, the one time he is called out publicly, he presents as remarkably shy.

Days of the Bagnold Summer is an independent, small audience film, which will only suit selective tastes.