Like his style or not, Spike Lee always has something to say. His latest epic (clocking in at 2 and a half hours), Da 5 Bloods, is no exception. This sprawling exploration of the ties that bind was originally slated for a cinema release; but COVID-19 scotched that. So Lee has released the film on Netflix. And while it might sacrifice some of its intended grandeur, it loses none of its power.

Like any Spike Lee Joint, Da 5 Bloods has a lot to say about a lot of things. Its key focus is America’s fraught relationship with Black servicemen. In the early scenes, Lee highlights how young Black men have been conscripted since the Civil War to fight for a country that denied them equal rights, and often refused to even acknowledge their service. But that grand historical issue is wrapped up in a more personal tale touching on camaraderie and the relationship between fathers and children.

In modern Ho Chi Minh City, four US veterans – Paul (Delroy Lindo), Otis (Clarke Peters), Eddie (Norm Lewis) and Melvin (Isaiah Whitlock Jr) – re-unite “in country” for the first time since the end of the Vietnam War. They plan to hike into remote territory to recover the body of Stormin’ Norman (Chadwick Boseman), their squad leader, who was killed in action. A mudslide has recently unearthed the wreck of a transport plane, which the men believe is Norman’s resting place. Oh, and the resting place of millions in gold bullion. 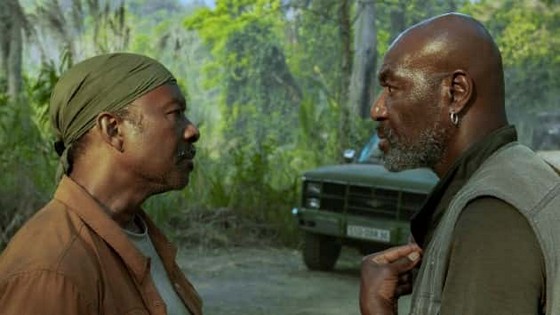 The men hire Vinh (Johnny Trí Nguyen) as their guide, even though Paul is wary of him. But then, Paul is wary of most people as he suffers from PTSD brought on by the war. But Paul’s own plans a dealt a blow when he discovers his son David (Jonathan Majors) has invited himself along after accessing his father’s emails. Over Paul’s objections, the other men allow David to join them on their quest. Meanwhile, Otis re-connects with Tien (Y. Lan) his former lover. Tien has some important connections. She hooks the group up with shady French “export trader” Desroche (Jean Reno) who will act as “fence” to get the gold out of Vietnam.

With everything seemingly in place, the five set out into rural Vietnam. Even though the war is long over, the country teems with hidden dangers. But the greatest danger may be someone within their group.

Lee (as is his way) references a lot of other movies in Da 5 Bloods, but the biggest influence seems to be Francis Ford Coppola’s Apocalypse Now; and via it, Joseph Conrad’s novel Heart of Darkness. In an early scene, the four friends visit a bar called “Apocalypse Now”. Wagner’s “Ride of the Valkyries” accompanies their first foray out of the city. They head out in a boat upriver, before having to continue on foot. Their quest involves searching for a real, but almost mythical, figure. And inevitably there will be a descent into madness.

But Lee also nods to films like The Big Red One, Platoon and Three Kings in the course of his story. The keen-eyed will also note that the names of the five main characters are the first names of The Temptations. That’s taken a step further with the fact that The Temptations’ manager was named Norman. One of the characters the men encounter is named Hedy Bouvier (played by Melanie Thierry). Bouvier was Jackie Kennedy’s maiden name, so this could be an oblique reference to John F Kennedy, the president who initiated American involvement in Vietnam. And dropping a real figure from the war, Hanoi Hannah (played here by Van Veronica Ngo), into the fictional narrative adds a touch of authenticity (even though her scenes are quite surreal).

One intriguing choice Lee makes is to use the older actors to depict themselves in the flashback sequences (set during the war). At first, their appearance alongside the much younger Chadwick Boseman as Norman is jarring. But on reflection, I think it might have been a stroke of genius. They see themselves as they are – old men. But Norman, who was killed, hasn’t aged at all in their memories.

Frequent Lee collaborator Terence Blanchard provides an evocative soundscape for the film. Pop music from the 1960s and ’70s – notably the songs of Marvin Gaye and Curtis Mayfield – complements his lush orchestral score. And Newton Thomas Sigel (Extraction) does a really remarkable job with the cinematography.

Even though the Oscars are still in a state of flux thanks to the pandemic, Oscar buzz has already greeted Delroy Lindo’s remarkable performance as Paul. While his character is the “showiest” in the film, he hits every single mark in a searing portrayal. Paul is a complicated character. As an example, he’s a Trump voter, but has sent his son to Morehouse College; the school attended by Dr Martin Luther King Jr (and by Lee; and Samuel L Jackson, by the way). Lindo finds all these beats in Paul. Jonathan Majors is (appropriately) far more subdued as David. Clarke Peters, Norm Lewis and Isaiah Whitlock Jr all provide excellent support as the other “Bloods” and each gets a moment in the spotlight.

Da 5 Bloods is a big movie, filled with big ideas. It’s layered and complex. But it also comes with big challenges – and several surprises – for an Australian (indeed, any non-American) audience which may not be fully “plugged into” all the issues it wants to highlight. Like all Spike Lee movies though, it’s designed to provoke a response. You won’t come away from it unmoved.