A Polish film about a teenage criminal might seem an odd vehicle to explore big questions of morality. But that’s what you get in director Jan Komasa’s extraordinary Corpus Christi. This deceptively simple story turns out to be one of the most inventive and profound films of the (admittedly disrupted) year.

The film would almost certainly have other layers for Polish audiences, but even at a remove here in Australia, it delivers a powerful message. If you look closely, it’s actually an incredibly clever allegory of the life a Christ, a layer that only enhances its distinctly humanist viewpoint. 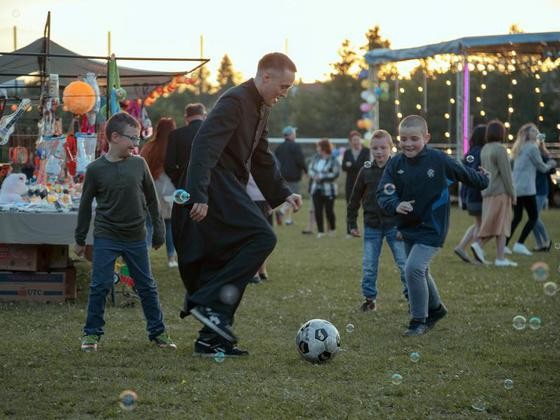 Daniel (Bartosz Bielenia) is in juvenile detention. He’s a bit of an outsider with his fellow inmates, not least because he’s embraced religion. He assists at Sunday services, and even hopes to enter the seminary. But the chaplain (Lukasz Simlat) informs him that his criminal record precludes him from training for the priesthood. After being paroled, Daniel sets out for a work assignment at a sawmill in a small country town. But one look at the rough-hewn place and its even rougher workforce puts Daniel off immediately. He walks into the woods to compose himself, and spots a church spire in the distance.

At the church, he meets local girl Eliza (Eliza Rycembel). Armed with a priest’s collar he picked up for a costume party, he convinces her he’s actually an itinerant priest. She takes him to the real vicar (Zdzislaw Wardejn), who cautiously accepts his tale and lets him stay the night in the presbytery. But the next day, the vicar falls ill and has to go to a larger town for treatment. Left alone, Daniel adopts the name Father Tomasz and begins ministering to the community. Eliza’s mother Lidia (Aleksandra Konieczna) – who happens to be Eliza’s mother – isn’t convinced by the newcomer, and keeps a close watch on him. Daniel soon discovers a tragedy has befallen the village. But he meets resistance in trying to find out just what happened, and why.

You might have heard the adage, “Faith without [good] works is dead”. Corpus Christi embraces that approach, contrasting the “blind” faith of some locals with Daniel’s approach of actually trying to help. Reciting prayers at a shrine for the dead isn’t going to bring them back – but taking action to heal the grieving achieves something. A working knowledge of Christianity would help to decipher some of the rituals and their significance to the story, but it’s not essential. Because Komasa and screenwriter Mateusz Pacewicz have crafted a story that transcends its setting to deliver universal truths. I also appreciated the fact that Komasa and Pacewicz don’t go for the easy option of treating faith as a joke. They delve into the motivations of the characters without resorting to pastiche. And while the film certainly criticises the hypocrisy of organised religion, its layered approach makes it all the more pointed.

Shooting largely on location in rural Poland, DOP Piotr Sobocinski Jr. delivers some remarkable images. Przemyslaw Chruscielewski’s film editing is a masterclass in slow build-up to a stunning climax. And the composing team of Evgueni Galperine and Sacha Galperine (By the Grace of God) provide an atmospheric score to underpin the action.

Bartosz Bielenia powers the film with an incredibly vibrant performance as Daniel. A more understated but nonetheless important performance from Eliza Rycembel as Eliza complements Bielenia perfectly. Aleksandra Konieczna plays Lidia with a steely resolve, coming as close as anyone to being the “bad guy”. Look out for Lukasz Simlat, who plays a small but pivotal role as the prison chaplain.

Corpus Christi is one of the most powerful, thoughtful and poignant films of the year so far. This intelligent parable delivers a message worth pondering for anyone who cares to listen.