In Curtis Vowell’s comedy Baby Done, outdoorsy Zoe (Rose Matafeo) works as an arborist, alongside her boyfriend Tim (Matthew Lewis). Theirs is a happy union. All their coupled-up friends seem to be having babies, but the thought of being tied down makes Zoe shudder. And then she discovers she’s pregnant.  Shellshocked Zoe doesn’t tell Tim and tries to get on with her life as if nothing has happened. After all, she is planning a trip to Canada to compete in the World Tree Climbing championships … and she won’t take “no” for an answer. 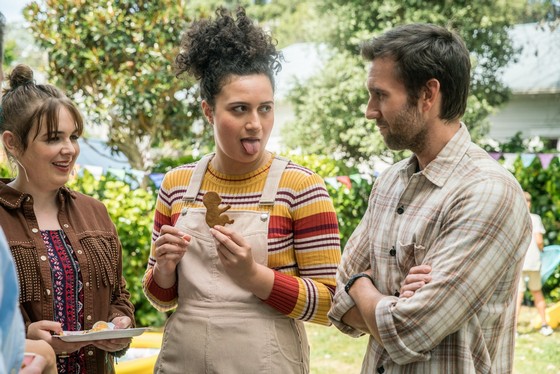 But the truth unexpectedly outs while Zoe is competing in her native New Zealand. Tim is sets out to get Zoe to settle down and chart a more sensible path. But obstinate Zoe – who wants her old life back – still isn’t having any of it, putting strain on their relationship – and leading to hijinks.

The story idea for Baby’s Done arose when writer Sophie Henderson unexpectedly fell pregnant to director husband Vowell while they were living in Melbourne. Although excited, the pair were totally unprepared. For Henderson, writing the screenplay was her way of coping.

Comedian Matafeo is a prize choice for the lead. She’s naturally funny, in spite of the fact her character is also annoying. Writer Henderson has done a fine job imbuing not only Zoe’s role, but others, with humour. She’s also pushed the envelope by introducing the outrageous or risqué. One element didn’t go down well with me was making light of a drug that could kill.

Baby Done is a lot of fun. It’s a small film but hits many of the right notes.