With the 50th anniversary of the moon landing in our very recent past, why not stage a space themed circus? Why not, indeed? And the producers of the hit shows The Illusionists, Circus 1903 and Le Noir, have done just that.

Several of the acts in the two-hour production, including interval, that is Cirque Stratosphere are truly mesmerising. Among them is statuesque Tymofii Chemko, who performs a series of high-flying athletic routines, including somersaults, on a pliable, transportable beam – supported by Oleksii Balakhchy and Mykola Mykytchyn – without missing a beat. He lands perfectly time and again. Fabulous to watch and admire. Nicolas-Yang Wang and Shengpeng Nie provide jaw dropping heroics by leaping, diving and tumbling through a series of hoops stacked one atop the other. The finale of that routine, with five rings, must be seen to be believed. It is mighty special.

Having seen a great deal of circus, I was familiar with nearly all of the dozen-strong acts performed by a cast of double that number. That is not to say they weren’t all impressive, merely that those not as familiar may be as incredulous as I was watching the two acts to which I have already referred. Aerialists on ring, swing and straps, a lithe and remarkably flexible pole dancer, a hyper speed roller skating duo on a small circular platform, a flying see-saw trio and two on the “wheel of death” are among the other routines.

And levity with a great deal of audience participation is a mainstay before Acts I and II and as new acts are set up. That is the domain of a onesie, spacesuit-clad clownish character Salvador Salangsang and a mute comedian, Steve Capps, with black tape across his mouth, who has appropriately been given the moniker Tape Face. 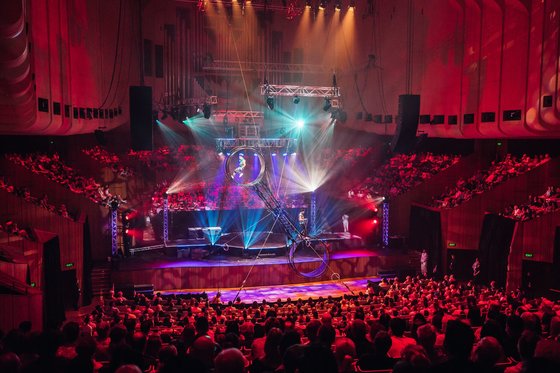 The costumes, in keeping with the show’s space theme, are nothing short of spectacular – creative, elegant and varied. Huge plaudits to costume designer James Browne. In the house is a DJ – Hikuri Roots – who ensures the soundtrack is lively and the sound effects work seamlessly with the acts. Another particular feature is the colourful and spectacular lighting – courtesy of Paul Smith – that undoubtedly serves to enhance the production.

Some of the routines are a tad long and there is a bit too much on (and off) stage crowd involvement, which has little if anything to do with the space theme. I think the show could benefit by being cut back by 20 minutes, although the opening night faithful with whom I saw it seemed to particularly appreciate what they were seeing. And there is no doubt that combining space with circus works … and works well. Cirque Stratosphere is playing at Hamer Hall until 11th January, before a return season at Sydney Opera House from 14th to 19th January, 2020.