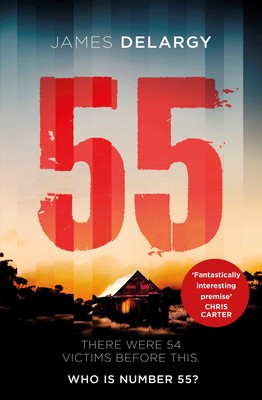 Rural noir is a thing at the moment, which means some stellar entries in the category, and some not so good ones. Makes opening each new novel and settling in for the experience a bit of rollercoaster ride. So did 55 live up to the hype? Well yes, yes it did.

That premise is particularly well delivered. With a slim cast of characters, and the identical testimony of two supposed victims, Delargy creates an impressive level of tension and forward momentum. There’s a bit of help from the added complication of the big city cop who arrives in town to take charge of the investigation. He’s a local boy moved on, and there’s plenty of past history between Jenkins and Mitch, the background to which is teased out in a series of flashback stories set around the search for a missing man when they were both new police recruits. As the perspective switches between current day and that old search, the personas of the two combatants – Heath and Gabriel – shift as well. It’s very hard to pick who is the victim and who is perpetrator.

Now I will admit I did wonder at one point why it was taking so long for the search for the graves (and the hut) to commence, but that was well into the story, and serves as more of a testament to the levels of confusion, and the number of questions, that had arisen by then. For a book that moves around between timelines, and provides insights into the current and past personal life of Chandler Jenkins into the bargain, the pace, and the constant building of tension works incredibly well.

Everything about 55 is supported by the creation of a really good central protagonist in Jenkins. Unsure who to believe, or how he is going to get to the bottom of this story, Jenkins is resolute, questioning, lacks confidence in his own ability, and struggles with the fallout from his divorce, care of his two young children and a slightly scratchy relationship with his own parents, whose help on the home front he relies upon heavily. He’s a very real person, and his position in the town of his youth feels and reads perfectly right. The town itself is less focused on. It’s remote, it’s dusty, it’s dry, it’s small town outback Australia. Everybody knows everybody and everything is out for all to see, which makes the idea that there’s been a serial killer lurking in the bush, that there are grave sites hidden away on a hill nearby, covered in wild bushland, mostly unknown territory even to long-term locals, intriguing.

The setting here is open, vast and seemingly unending, yet there’s hidden spots and areas. Whilst it’s always possible to believe that nobody is ever totally off the radar no matter where they are, it’s sobering to come across the sneaking possibility that there are places that people can disappear to. Alive and dead. What’s really cleverly done is the way that there are echoes of place in the experience and attitude of the small cast of characters in this novel. Some, like Jenkins, are hiding in plain sight, others are hopeful, less inhibited by the restrictions and expectations, less overwhelmed by the vastness of landscape around them.

There are also female characters in this book, but this is very much a male focused book, with the concentration mostly on two sets of battling men: Jenkins and his old colleague Mitch, and Heath and Gabriel. There’s a level of testosterone driven madness in the first, and just flat out madness in the second. There are other supporting characters, in the police station, in the town, and at home, all of whom step back as the focus becomes more and more on these 4 men and whatever the hell the games are that they are all playing.

Which it turns out, to be the whole point. 55 is a clever book about the dangerous games that these men are playing, and just what it is that makes them see the path, and not take King Lear’s words to heart:

O, that way madness lies; let me shun that;
No more of that.