“On a normal morning, a lone police car would be parked out the front of the station, waiting for something illegal to happen.” 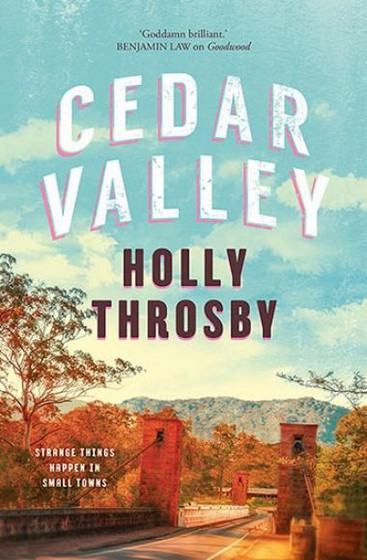 Cedar Valley, Holly Throsby’s second novel, begins with the arrival of two strangers on the first day of summer in 1993. One, Benny Miller, has come to live in a house which an old friend of her recently deceased mother has offered to her. The other, a man dressed in a suit, tie and jumper, clothes which are wholly unsuitable for a hot Australian summer. When the man sits down outside Cedar Valley Curios & Old Wares and quietly dies there is a mystery to be solved.

There’s a secondary mystery in the form of Vivian Moon, Benny’s mother, who was a distant figure to her and in coming to Cedar Valley she hopes learn something about her as well. Told through the eyes of Benny and two other main characters. Cora Franks, the proprietor of Cedar Valley Curios and Old Wares, and Detective Sergeant Anthony Simmons Cedar Valley is a story of a small town and the relationships, both past and present, within it.

As someone who grew up in regional Australia, albeit in a larger population centre, I thoroughly enjoyed Cedar Valley. Holly Throsby writes with a dry wit and a keen eye for the characters and the town itself. In telling stories set in rural Australia authors can sometimes be guilty of condescension, to almost sneer at the quietness of rural life, Holly Throsby beautifully avoids this with a gentle wry affection for Cedar Valley and it’s residents. She also gives her characters plenty of space to develop and grow as the novel progresses and there’s a nostalgia, in some cases sadness, in telling the story of a time past.