Persons Unknown by Susie Steiner is the sequel to Missing, Presumed. 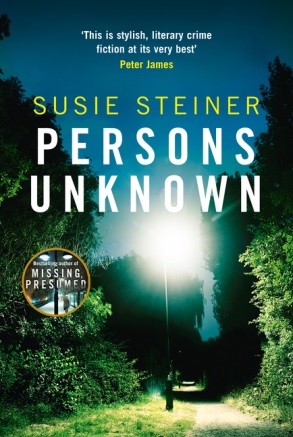 As dusk falls a young man staggers through a park, far from home, bleeding from a stab wound. He dies where he falls; cradled by a stranger, a woman’s name on his lips in his last seconds of life.

DI Manon Bradshaw can’t help taking an interest – these days she only handles cold cases, but the man died just yards from the police station where she works.

She’s horrified to discover that both victim and prime suspect are more closely linked to her than she could have imagined. And as the Cambridgeshire police force closes ranks against her, she is forced to contemplate the unthinkable.

How well does she know her loved ones, and are they capable of murder?

Persons Unknown picks up some months after the first book ends. DI Manon Bradshaw is pregnant and working on cold cases, when a man is stabbed close to the police station. Turns out, he’s more closely linked to her than she would have thought, and her hackles rise when the force closes ranks against her. Why? And what’s her adopted son got to do with it?

Despite the interesting premise, the story started slowly and didn’t quite achieve the punchy-pace of its predecessor. A good, but for me, not great read. (Harper Collins – $34.99)