Jordan Peele’s (Get Out) latest horror-thriller, Us, explores the concept of evil doppelgängers. Peele writes, directs and co-produces. He’s played on his fear of look-alikes. 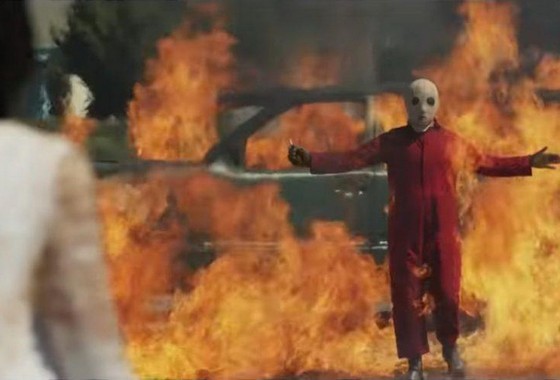 Lupita Nyong’o is Adelaide Wilson, a woman returning to her childhood home. She’s bringing her husband, Gabe (Winston Duke), and their two children, Zora (Shahadi Wright Joseph) and Jason (Evan Alex). They’re on summer break in northern California. Adelaide remains haunted by an unresolved trauma from her past. Compounded by a string of eerie coincidences, her paranoia elevates as she grows increasingly certain something bad is going to happen.

After spending a tense day at the beach with their friends, Kitty and Josh Tyler (Elisabeth Moss and Tim Heidecker), the Wilsons return to their holiday home. There they discover the silhouettes of four figures standing in their driveway. “Macho” Gabe tries to shoo them away, but they won’t be moved. Before long this becomes a full-scale home invasion. Dressed in red, the figures are flawed copies of each of the family members, come to extract retribution.

Only one – Adelaide’s double – speaks. The others can only let out groaning sounds. Why are they there? Exactly what are they after?

Jordan Peele takes a leaf out of Michael Haneke’s truly chilling Funny Games and adds a zombie-like element in Us. Shocks and surprises emerge, along with silliness.

Lupita Nyong’o was a strong lead and her character’s fear unfolds through flashbacks. I liked the set-up. Peele introduces events from the past that led to what’s happening in the present. It is one of those films where you wait for the axe to fall (again and again) and wonder if there’s a way out.

And just when you think everything is all wrapped up … well, let’s just say it may not be.