Freshly realized as a hot take on Perth’s monied-up western suburbs culture, The Real Housewives of Perth is based on the hit television show franchise that never failed to spill on the not-so-secret lives of rich ladies-who-lunch.  (Though ‘lunch’ may be used here as a handy euphemism for selfies, shopping and next-level female power sledging).   All the fake tan, killer outfits and blingy accessories of course screamed ‘musical’!  Prepare to be dazzled by the vivacious enthusiasm of the housewives as they scheme and connive to come out on top and live the truly amazing lives that we wage earners can only dream of.

First, we must meet five gorgeous women in mourning. At the loss of their own dear bestie housewife Poppy, the group have much to ruminate upon.  Who is most deserving to next wear the crown of Head Housewife?  Who truly has the best new lifestyle product to flog on breakfast TV?  Who is fit enough to be up front at Bounce class? They may be all glamour and sparkle on the outside, but wives Joanne, Babette, Beezus, Lulu and Penny do have thoughts.  Deep, scary thoughts.  About how it can all come to a terrible end with the fraud squad ruining your Bollywood themed house party and your husband leaving you to it to nick off instead to safer climes in a sombrero.

Left with her reputation in tatters, Joanne is facing the prospect of selling shoes to make ends meet.  Her bestie Babette is no longer as supportive as she once was, and to be shunned by those you thought were your most darling and dearest babes is just crushing.  Best to concentrate on looking your sparkliest, even as your once envious life slowly falls apart.  Being always amazing takes serious coin and there is always someone willing to nip in and take your spot at the top.  Joanne discovers that there may in fact be another way in which she can bring in the bucks. No one is going to like it.

It’s a treat to witness such an enthusiastic group of actresses (and one very versatile actor) display such a shared energy for delivering what were often quite complicated aural stories.  At times there was evident overreach, in that the singers did struggle a little to keep pace with their tracks.  There is a lot happening right off the bat and before we are sure of who is who, we need to concentrate mighty hard on the lyrical narration.  This improved steadily as the musical progressed and the confidence of the actors grew with more stage time. 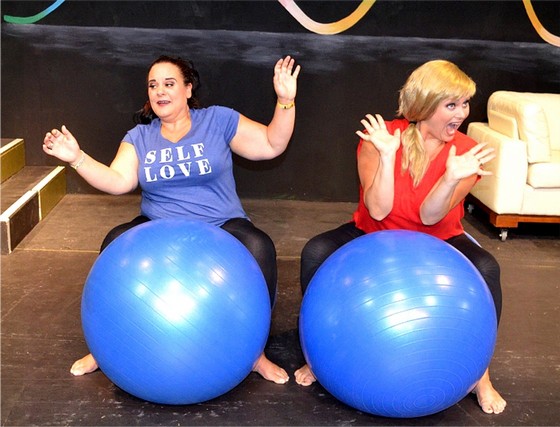 Displaying facial contortion skills that your 13 year old daughter would be proud of, the cast are a delight to watch as their characters continually take pot shots at each other’s lives and perceived ‘success’, whether that be loosely assessed by a wife’s ability to maintain the interest of any husband not actively despised, or by the willingness of others to replicate your style as a homage to your level of queendom.

Naomi Cooper, Katherine Blower, Hayley Green, Kate Elder and Tania Morrow all march across the stage expertly in sky high heels, negotiating the challenges of dominating a space whilst having to share it with other larger-than-life characters who all employ lots of aggrieved and dramatic poses (to the point that it’s a valid concern that someone might lose an eye).  Jacob Turner is hysterical, and the multi-tasking required of an actor to play two different men in the same scene is stressful to observe.  The cast shows such bravery in throwing themselves around on the boards, ducking and weaving around the minimal props and maximum gestures. The scope of the production is such that it could easily fill a much larger space – your attention jumps from one wife to the next, as the graduation of dissent and the dissolution of old bonds stirs each into a vortex of suspicion.

The fascination we hold with the relationship dynamics of people who are living sparkling lives of such conspicuous consumption, so different to our own effort driven experiences, is key in The Real Housewives of Perth.  Our envy is important to the success of others!  (So it is that the audience is deservedly lambasted via a hilariously delivered song voiced by Joanne in full righteous splendour).

“This musical was first performed in the US in 2016 and the writers encouraged us to localise the content to ensure it was relevant to our audience. As soon as I saw the script I felt it was the right one for my debut.  I loved the action and the story is real”.

It’s always a good sign you’ve had a memorable night out at the theatre when you find yourself crooning in the darkness of the car all the songs you’ve just heard for the first time, as you drive yourself home.