Dread is palpable throughout Arthur Miller’s drama A View from the Bridge. The Melbourne Theatre Company’s version features seven actors and one old wooden chair but held me transfixed for two hours.

The time is the 1950s; and the place an Italian-American neighbourhood near the Brooklyn Bridge in New York. The narrator is Alfieri (Marco Chiappi), who was raised in Italy but is working as an American lawyer. He represents the “bridge” between the two cultures. 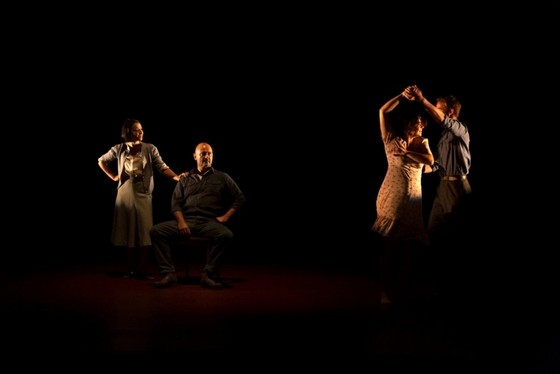 Eddie Carbone (Steve Bastoni) is a conscientious dockworker. He and wife Beatrice (Daniela Farinacci) have nurtured and raised their orphaned niece Katie (Zoe Terakes). Eddie, in particular, has been very protective of her. Now 17, Katie is ready to spread her wings, but Eddie isn’t ready to let her go. Things come to a head with the arrival of two of Beatrice’s Sicilian relatives, Marco (Damian Walsh-Howling) and his younger brother Rodolpho (Andrew Coshan). With economic conditions so unfavourable in Italy, they enter the USA illegally.

Married with three sickly children, Marco intends to stay in the country for a few years. He wants to work and send money back to his family, before heading back home. With no commitments, Rodolpho though would like nothing more than to make the US his home … and live the American dream. Katie takes an immediate shine to Rodolpho – who also happens to sing and has a fine sense of humour. And he reciprocates, much to Eddie’s disquiet. Eddie quickly expresses his dislike for Rodolpho and, not surprisingly, for any union between he and Katie.

But there’s much more here than first meets the eye … and before A View from the Bridge ends, there will be a great deal of ugliness as a family is torn apart.

Arthur Miller’s masterpiece remains just as powerful in this new production directed by Iain Sinclair as when it first opened on Broadway in 1955.

As a member of the audience, you know very early on that this can’t end well and then it is a question of how and when the guillotine will fall. Circumstances build and build to a breaking point. 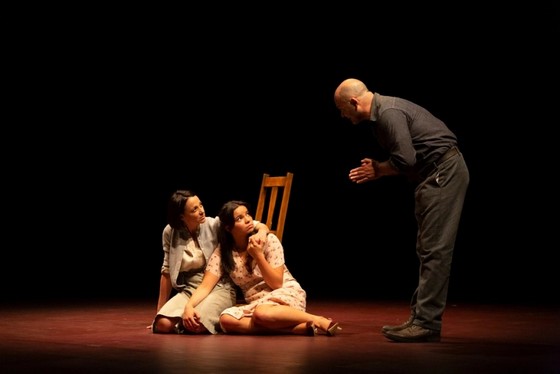 Steve Bastoni is superb as the tightly wound central character. Eddie holds a dark, unspeakable secret. Polished too is Daniela Farinacci as his dutiful wife, but one who has a keen understanding of what’s going on, however try as she does she can’t seem to talk her husband down from the precipice. Zoe Terakes is compelling as the at-first-naïve Katie, who grows up fast – she has to – before our very eyes, as her uncle turns from hero to villain. The power in A View from the Bridge is in the words, but also in these performances.

The minimalist staging is most effective in conveying the horrors of the situation.

This is an electric, not-to-be-missed production playing at Southbank Theatre, The Sumner until 18 April 2019. I saw the first preview performance.